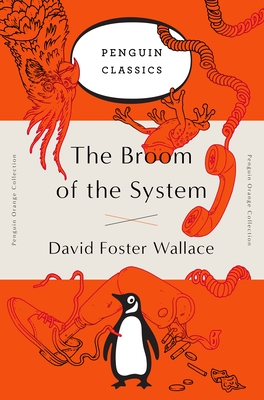 By David Foster Wallace
$18.00
On Our Shelves Now

I was astonished by this book. Between the story of the main character trying to find Lenore (both her grandmother and herself), her parrot who repeats scripture, her brother who refers to himself as the antichrist, and the sessions with “about the worst psychologist of all time”, this book is nonstop fun. This book is witty, as well as absurd. I laughed out loud, and was alternately moved to introspection. I learned so much while reading because I constantly found myself lacking a good enough understanding to completely enjoy what Foster Wallace was delving into. I cannot wait to read this again to see what new experiences it has in store.

The Broom of the System

The “dazzling, exhilarating” (San Francisco Chronicle) debut novel from one of the most groundbreaking writers of his generation, The Broom of the System is an outlandishly funny and fiercely intelligent exploration of the paradoxes of language, storytelling, and reality.

David Foster Wallace (1962–2008) wrote what would become his first novel, The Broom of the System, as his senior English thesis at Amherst College. He received an MFA from the University of Arizona in 1987 and briefly pursued graduate work in philosophy at Harvard. His second novel, Infinite Jest, was published in 1996. Wallace taught creative writing at Emerson College, Illinois State University, and Pomona College and published the story collections Girl with Curious Hair, Brief Interviews with Hideous Men, and Oblivion and the essay collections A Supposedly Fun Thing I’ll Never Do Again and Consider the Lobster. He was awarded the MacArthur Fellowship, a Lannan Literary Award, and a Whiting Writers’ Award and served on the Usage Panel for The American Heritage Dictionary of the English Language. His last novel, The Pale King, was published posthumously in 2011.

"Wonderful... a cathartic experience with lots of laughs and lots of deeper meanings." —The Washington Post Book World