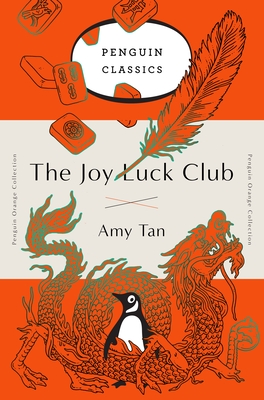 In their lives, most readers find that one book they think everyone should read at least once. This is that book for me. A complex interweaving of eight different stories that eventually are woven into an overall tapestry of family, friendship, hardship, love, and loss. Perhaps was was most moving for me was the insight into the lives of the older women before their immigration to the United States. These vignettes blatantly show that despite many cultural differences, life is life, and regardless of where life is, many of the challenges are the same. Though circumstances may change from generation to generation, things that are important are constant - love, family, and independence.

“The Joy Luck Club is one of my favorite books. From the moment I first started reading it, I knew it was going to be incredible. For me, it was one of those once-in-a-lifetime reading experiences that you cherish forever. It inspired me as a writer and still remains hugely inspirational.” —Kevin Kwan, author of Crazy Rich Asians

Amy Tan is the author of The Joy Luck Club, The Kitchen God’s Wife, The Hundred Secret Senses, The Bonesetter’s Daughter, The Opposite of Fate: Memories of a Writing Life, Saving Fish from Drowning, The Valley of Amazement, and two children’s books, The Moon Lady and The Chinese Siamese Cat, which was adapted into a PBS television series. Tan was also a coproducer and co-screenwriter of the film version of The Joy Luck Club. Her essays and stories have appeared in numerous magazines and anthologies, and her work has been translated into thirty-five languages. She lives with her husband in San Francisco and New York.

"Powerful...full of magic...you won't be doing anything of importance until you have finished this book." —Los Angeles Times

"Wonderful...a significant lesson in what storytelling has to do with memory and inheritance." —San Francisco Chronicle

“This Beloved Novel Is the Kind of Book We Need Right Now. Mothers and daughters lay at the heart of Amy Tan’s The Joy Luck Club but in bridging the generational gap—and crisscrossing the globe—this 1989 novel imparts key lessons for forging ahead in trying times” —Martha Cheng, Wall Street Journal

“The Joy Luck Club is one of my favorite books. From the moment I first started reading it, I knew it was going to be incredible. For me, it was one of those once-in-a-lifetime reading experiences that you cherish forever. It inspired me as a writer and still remains hugely inspirational.” —Kevin Kwan, author of Crazy Rich Asians

“Reading it really changed the way I thought about Asian-American history. Our heritage has a lot of difficult stuff in it — a lot of misogyny, a lot of fear and rage and death. It showed me a past that reached beyond borders and languages and cultures to bring together these disparate elements of who we are. I hadn’t seen our history like that before. At that time, we hadn’t seen a lot of Asian-American representations anywhere, so it was a big deal that it even existed. It made me feel validated and seen. That’s what’s so important about books like that. You feel like, Oh my god, I exist here. I exist in this landscape of literature and memoir. I’m here, and I have a story to tell, and it’s among the canon of Asian-American stories that are feminist and that are true to our being. It’s a book that has stayed with me and lived in me.” —Margaret Cho