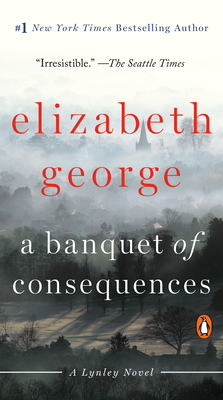 As Inspector Thomas Lynley investigates the London angle of an ever more darkly disturbing case, his partner, Barbara Havers, is looking behind the peaceful façade of country life to discover a twisted world of desire and deceit.

The suicide of William Goldacre is devastating to those left behind who will have to deal with its unintended consequences—could there be a link between the young man's leap from a Dorset cliff and a horrific poisoning in Cambridge?

After various issues with her department, Barbara Havers is desperate to redeem herself. So when a past encounter gives her a connection to the unsolved Cambridge murder, Barbara begs Thomas Lynley to let her pursue the crime, knowing one mistake could mean the end of her career.
Full of shocks, intensity, and suspense from the first page to the last, A Banquet of Consequences reveals both Lynley and Havers under mounting pressure to solve a case both complicated and deeply disturbing.

Elizabeth George is the New York Times bestselling author of twenty-one psychological suspense novels, four young adult novels, two books of nonfiction, and two short-story collections. Her work has been honored with the Anthony and Agatha Awards, two Edgar nominations, and both France's and Germany's first prize for crime fiction. She has taught creative writing internationally and is the recipient of an honorary doctorate in humane letters and an honorary MFA in creative writing.  She lives in Seattle, Washington.

Praise for A Banquet of Consequences

“Undoubtedly one of Ms. George’s best mysteries, original in concept and fascinating in the breadth of its characters.”
—The Washington Times

“As absorbing as her first book in this acclaimed series. . . . [George is] one of the reigning queens of the genre.”
—Milwaukee Journal Sentinel

"Elizabeth George is a superstar of the crime-fiction world, British Inspector Division. Deservedly so: Her tales always provide nuanced character studies and insights into social issues along with their intricate mysteries."
—The Seattle Times

"It’s tough to resist the pull of [George’s] storytelling once hooked."
—USA Today

"Ms. George can do it all, with style to spare."
—The Wall Street Journal

"George's . . . ability to continually enhance the portraits of Lynley, Havers, and other recurring characters while generating fully fleshed new ones for each novel is nothing less than superlative, and her atmospheric prose, complete with lovely and detailed descriptions of her setting, combines to add literary gravitas to her work . . . A worthy addition to her portfolio and one that simultaneously disturbs and satisfies."
—Richmond Times-Dispatch

"[Lynley is] one of the great character portraits in contemporary crime fiction."
—The Boston Globe