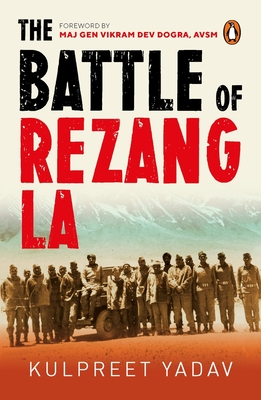 On 18 November 1962, the Charlie Company of the 13 Kumaon Battalion, Kumaon Regiment, fought a Chinese attack at Rezang La Pass in Ladakh, India. The company comprised 120 soldiers and was led by Maj. Shaitan Singh. Of these soldiers, 110 were martyred in the attack.

The Indian search party, which visited the battlefield on 10 February 1963, made a startling discovery-the frozen bodies of the men who had died were still holding guns in their hands, having taken bullets on their chests. One PVC (Param Vir Chakra), eight VCs (Vir Chakras), four SMs (Sena Medals) and one M-in-D (Mentioned-in-Dispatches) were awarded to the soldiers of the Charlie Company, making it one of the highest decorated companies of the Indian Army to this day. The valour of the Charlie Company not only successfully stopped China's advance, but it also resulted in the Chushul airport being saved, thereby preventing a possible Chinese occupation of the entire Ladakh region in 1962. According to reports, a total of 1300 Chinese soldiers were killed trying to capture Rezang La. The Charlie Company was an all-Ahir company, and most of the soldiers who fought the battle at 18,000 feet came from the plains of Haryana. The Battle of Rezang La is their story.

A product of the Naval Officers' Academy, Kulpreet Yadav has spent two decades as an officer in uniform and has successfully commanded three ships in his career. Since his retirement as Commandant from the Indian Coast Guard in 2014, he has authored several books in diverse genres, including espionage, true crime and romance. Winner of the
Best Fiction Author Award for Murder in Paharganj, an espionage novel, at the Gurgaon Literary Festival in 2018, Kulpreet is also an actor and a film-maker. He lives with his family in Delhi.