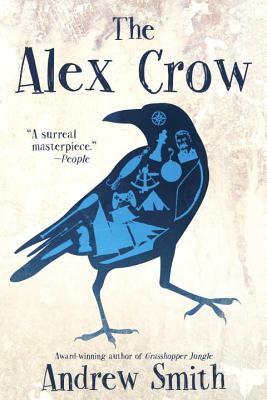 The author of Printz Honor book Grasshopper Jungle returns with another genre-bending literary exploration of the absurd.

Once again blending multiple story strands that transcend time and place, Grasshopper Jungle author Andrew Smith tells the story of 15-year-old Ariel, a refugee from the Middle East who is the sole survivor of an attack on his small village. Now living with an adoptive family in Sunday, West Virginia, Ariel's story of his summer at a boys' camp for tech detox is juxtaposed against those of a schizophrenic bomber and the diaries of a failed arctic expedition from the late nineteenth century. Oh, and there’s also a depressed bionic reincarnated crow.

"Smith takes [readers] to a place where humanity is imbued with the potential to render people inhuman…and reminding us that being human, all too human, is far better than any conceivable alternative.” —BCCB Reviews, starred review

Andrew Smith knew ever since his days as editor of his high school newspaper that he wanted to be a writer. His books include Grasshopper Jungle and Winger. Smith prefers the seclusion of his rural Southern California setting, where he lives with his family.


"Therein lies the brilliance of Andrew Smith. He somehow always finds a way to turn the reader inside out, by grounding the farcical or turning mad science and vomit into art.” —New York Times Book Review

"The weirdness shakes out ridiculously well in this often humorous and touching sci-fi tome." —USA Today

"A smartly cohesive exploration of survival and extinction, and the control humans have (or shouldn’t have) over such matters." —Horn Book, starred review

"Smith takes [readers] to a place where humanity is imbued with the potential to render people inhuman…and reminding us that being human, all too human, is far better than any conceivable alternative.” —BCCB Reviews, starred review

“Andrew Smith is unequivocally one of the reigning kings of YA.” —Bustle.com

“In a market oversaturated by trends . . .  [Smith’s] novels are fresh and exciting.” —VICE.com

“This raunchy, bizarre, smart and compelling sci-fi novel defies description—it’s best to go into it with an open mind and allow yourself to be first drawn in, then blown away.” —Rolling Stone

“A literary joy to behold. . . . reminds me of Kurt Vonnegut’s Slaughterhouse Five, in the best sense.”
—The New York Times Book Review

“A bizarrely fascinating premise that Smith pulls off with panache. . . . Like an absurdist Middlesex. A-” —Entertainment Weekly

“I found myself saying over and over again, ‘Where in the heck is he going with this?’ all the while turning the pages as fast as I could. Mostly I kept thinking, This was a brave book to write.” —Terry Brooks, author of the Shannara series


“Andrew Smith is the bravest storyteller I know. Grasshopper Jungle is the most intelligent and gripping book I’ve read in over a decade. It’s a masterpiece.” —A. S. King, Printz Honor–winning author of Ask the Passengers and Please Ignore Vera Dietz


“Grasshopper Jungle plays like a classic rock album, a killing machine of a book built for the masses that also dives effortlessly into more challenging, deeper regions of emotion. Above all else, when it’s done you want to play it all over again. It’s sexy, gory, hilarious, and refreshingly amoral. I wish I’d had this book when I was fifteen.” —Jake Shears, Scissor Sisters

“This book is nothing short of a brilliant, hilarious thrill-ride that is instantly infectious. The deft hand by which Smith explores teenage love and sexuality . . . is truly breathtaking. In writing a history of the end of the world, Smith may have just made history himself.” —John Corey Whaley, Printz Award–winning author of Where Things Come Back

“Grasshopper Jungle, in many ways, is a book about how there might be a manual for defeating monsters that have invaded town, but there’s not going to be an easy manual for everything else that weighs on the mind.” —A.V. Club

“You, too, will love Smith’s bold, bizarre, and beautiful novel.”—The Boston Globe

“No author writing for teens today can match Andrew Smith’s mastery of the grotesque, the authentic experiences of teenage boys or the way one seamlessly becomes a metaphor for the other.” —BookPage, Top February Teen Pick

"A meanderingly funny, weirdly compelling and thoroughly brilliant chronicle of ‘the end of the world, and shit like that’...a mighty good book." —Kirkus, starred review

"Filled with gonzo black humor, Smith's outrageous tale makes serious points about scientific research done in the name of patriotism and profit, the intersections between the personal and the global, the weight of history on the present, and the often out-of-control sexuality of 16-year-old boys." —PW, starred review