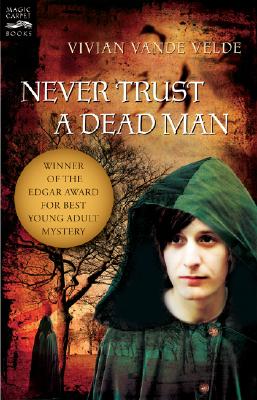 When Selwyn is accused of murdering his rival, Farold, he is sealed in the village burial cave with Farold’s moldering corpse to await starvation—or worse. Worse comes along quickly in the form of a witch who raises Farold from the dead. Selwyn thought he disliked Farold when he was alive, but that was nothing compared to working by the dead man’s side as they search for the real killer.

Vivian Vande Velde has written many books for teen and middle grade readers, including Heir Apparent, User Unfriendly, All Hallow's Eve: 13 Stories, Three Good Deeds, Now You See It ..., and the Edgar Award–winning Never Trust a Dead Man. She lives in Rochester, New York. Visit her website at www.vivianvandevelde.com.

[set star] “Filled with engaging characters, witty dialogue, and lots of action, this is an entertaining blend of fantasy, whodunit, and comedy.”—School Library Journal (starred) “Universally appealing and difficult to put down.”—Kirkus Reviews —