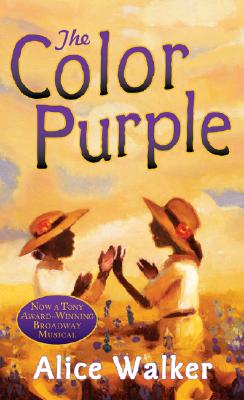 I admit that this book came to me following my viewing of the film of the same name. While both in both mediums, the story gives poignant examples of the transformative power of love and the disfiguring effect of cruelty - the novel by far explores both much more deeply. Walker also skims the surface of social issues such as class, race, religion, and of course, family. The story is both beautiful and horrible, heart-warming and heart-wrenching. If you liked the film, you'll love the book. If you didn't like the film, read the book anyway.

Celie is a poor black woman whose letters tell the story of 20 years of her life, beginning at age 14 when she is being abused and raped by her father and attempting to protect her sister from the same fate, and continuing over the course of her marriage to "Mister," a brutal man who terrorizes her. Celie eventually learns that her abusive husband has been keeping her sister's letters from her and the rage she feels, combined with an example of love and independence provided by her close friend Shug, pushes her finally toward an awakening of her creative and loving self.

ALICE WALKER is an internationally celebrated writer, poet, and activist whose books include seven novels, four collections of short stories, four children’s books, and volumes of essays and poetry. She won the Pulitzer Prize in Fiction in 1983 and the National Book Award.