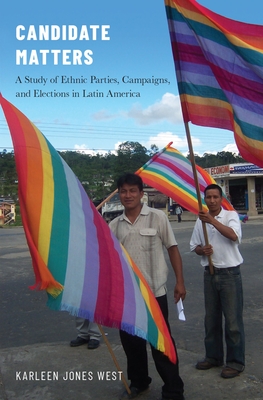 In developing democracies, political parties built around charismatic personalities, coupled with populist campaigns, often ascend to power. This tactic has long been effective in Latin America, and has resulted in parties that rely heavily on personalistic appeals and vote-buying. The predominant view is that ethnic parties are an exception to this rule; they behave differently from traditional populist parties by attracting voters based on the expectation that they will create policies to provide for the groups that they represent. In Candidate Matters: A Study of Ethnic Parties, Campaigns, and Elections in Latin America, Karleen Jones West shows that under certain conditions, niche parties--such as ethnic parties--are not that different from their mainstream counterparts. Through a detailed examination of the Pachakutik party in Ecuador, she shows that the characteristics of individual candidates campaigning in their districts shapes party behavior. Ethnic parties that are initially programmatic can become personalistic and clientelistic because vote-buying is an effective strategy in rural indigenous areas, and because candidates with strong reputations and access to resources can create winning campaigns that buy votes and capitalize on candidates' personal appeal. Why do niche parties in developing democracies struggle to maintain programmatic and meaningful platforms? West argues that when candidates' legislative campaigns are personalistic and clientelistic in their districts, niche parties are unable to
maintain unified programmatic support. By combining in-depth fieldwork on legislative campaigns in Ecuador with the statistical analyses of electoral results and public opinion, she demonstrates the importance of candidates and their districts for how niche parties compete, win, and become influential in developing democracies.

Karleen Jones West is an Associate Professor of Political Science at SUNY Geneseo, specializing in comparative institutions, public opinion, and the politics of sustainability. Her research has been funded by the National Science Foundation and the Latin American Public Opinion Project, and has been published in Comparative Political Studies, Latin American Research Review, Legislative Studies Quarterly, Party Politics, Global Environmental Studies, among others. She is co-author of Who Speaks for Nature?, which inspired a documentary of the same name.