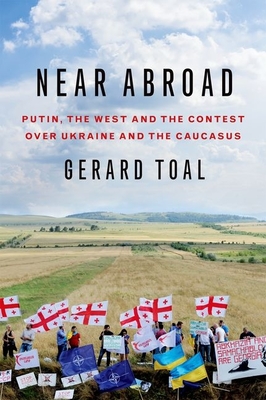 Before Russia invaded Ukraine, it invaded Georgia. Both states are part of Russia's "near abroad" - newly independent states that were once part of the Soviet Union and are now Russia's neighbors. While the Russia-Georgia war of 2008 faded from the headlines in the wake of the global recession, the geopolitical contest that created it did not. Six years later, the spectre of a revanchist Russia returned when Putin's forces invaded and annexed the Crimean peninsula, once part of Russia but an internationally recognized part of Ukraine since the Soviet collapse. Crimea's annexation and follow on conflict in eastern Ukraine have generated the greatest geopolitical crisis on the European continent since the end of the Cold War. In Near Abroad, the eminent political geographer Gerard Toal moves beyond the polemical rhetoric that surrounds Russia's interventions in Georgia and Ukraine to study the underlying territorial conflicts and geopolitical struggles. Central to understanding are legacies of the Soviet Union collapse: unresolved territorial issues, weak states and a conflicted geopolitical culture in Russia over the new territorial order. The West's desire to expand NATO contributed to a growing geopolitical contest in Russia's near abroad. This found expression in a 2008 NATO proclamation that Georgia and Ukraine will become members of NATO, a "red line" issue for Russia. The road to invasion and war in Georgia and Ukraine, thereafter, is explained in Near Abroad. Geopolitics is often thought of as a game of chess. Near Abroad provides an account of real life geopolitics, one that emphasizes changing spatial relationships, geopolitical cultures and the power of media images. Rather than being a cold game of deliberation, geopolitics is often driven by emotions and ambitions, by desires for freedom and greatness, by clashing personalities and reckless acts. Not only a penetrating analysis of Russia's relationships with its regional neighbors, Near Abroad also offers an analysis of how US geopolitical culture frequently fails to fully understand Russia and the geopolitical archipelago of dependencies in its near abroad.