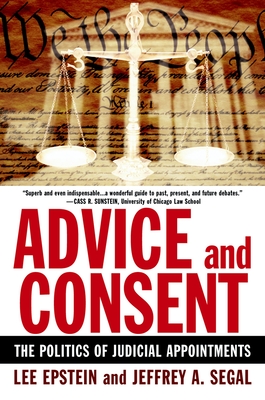 From Louis Brandeis to Robert Bork to Clarence Thomas, the nomination of federal judges has generated intense political conflict. With the coming retirement of one or more Supreme Court Justices--and threats to filibuster lower court judges--the selection process is likely to be, once again,
the center of red-hot partisan debate.
In Advice and Consent, two leading legal scholars, Lee Epstein and Jeffrey A. Segal, offer a brief, illuminating Baedeker to this highly important procedure, discussing everything from constitutional background, to crucial differences in the nomination of judges and justices, to the role of
the Judiciary Committee in vetting nominees. Epstein and Segal shed light on the role played by the media, by the American Bar Association, and by special interest groups (whose efforts helped defeat Judge Bork). Though it is often assumed that political clashes over nominees are a new phenomenon,
the authors argue that the appointment of justices and judges has always been a highly contentious process--one largely driven by ideological and partisan concerns. The reader discovers how presidents and the senate have tried to remake the bench, ranging from FDR's controversial "court packing"
scheme to the Senate's creation in 1978 of 35 new appellate and 117 district court judgeships, allowing the Democrats to shape the judiciary for years. The authors conclude with possible "reforms," from the so-called nuclear option, whereby a majority of the Senate could vote to prohibit
filibusters, to the even more dramatic suggestion that Congress eliminate a judge's life tenure either by term limits or compulsory retirement.
With key appointments looming on the horizon, Advice and Consent provides everything concerned citizens need to know to understand the partisan rows that surround the judicial nominating process.