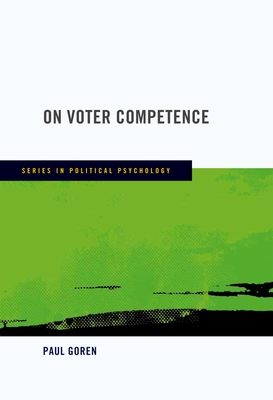 A half century of research shows that most citizens are shockingly uninformed about public affairs, liberal-conservative ideologies, and the issues of the day. This has led most scholars to condemn typical American voters as politically brainless and to conclude that policy voting lies beyond their reach. On Voter Competence breaks sharply from this view. According to Paul Goren, people vote based on abstract policy principles, a practice that has escaped scholars because they have searched for evidence of policy voting in the wrong places. Once we turn away from liberal-conservative predispositions and issue preferences, we find that nearly everyone holds genuine policy principles and uses these to guide their votes on election day. Three key principles divide the Democratic and Republican parties: limited government, traditional morality, and military strength. Deftly integrating research in social and political history, social and political psychology, and electoral behavior, Goren argues that nearly all citizens keep these principles in mind. The principles function as central heuristics in their belief systems, are rooted deeply in basic human values, and guide presidential choice to a similar degree for voters across the sophistication spectrum. Goren's comprehensive analysis of opinion data from the past six presidential elections and several new national surveys yields unequivocal support for these claims. Contrary to the indictment leveled by most of the scholarly community and political pundits more generally, ordinary citizens who are neither deeply knowledgeable nor engaged with the world of public affairs prove as adept as their more sophisticated counterparts in grounding presidential votes in abstract views about public policy. Insofar as citizen competence can be equated with the development and use of bedrock principles, the American voter performs far better than has been recognized in the past.

Paul Goren is Associate Professor in the Department of Political Science at the University of Minnesota. He has published widely in leading journals on the topics of voting behavior, partisanship, political information, public opinion, and values.