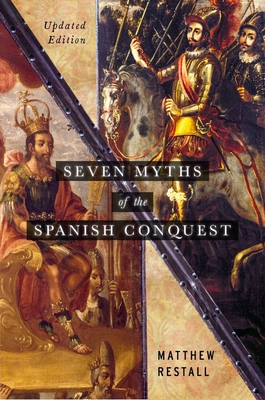 An update of a popular work that takes on the myths of the Spanish Conquest of the Americas, featuring a new afterword. Seven Myths of the Spanish Conquest reveals how the Spanish invasions in the Americas have been conceived and presented, misrepresented and misunderstood, in the five centuries since Columbus first crossed the Atlantic. This book is a unique and provocative synthesis of ideas and themes that were for generations debated or perpetuated without question in academic and popular circles. The 2003 edition became the foundation stone of a scholarly turn since called The New Conquest History. Each of the book's seven
chapters describes one myth, or one aspect of the Conquest that has been distorted or misrepresented, examines its roots, and explodes its fallacies and misconceptions. Using a wide array of primary and secondary sources, written in a scholarly but readable style, Seven Myths of the Spanish
Conquest explains why Columbus did not set out to prove the world was round, the conquistadors were not soldiers, the native Americans did not take them for gods, Cort's did not have a unique vision of conquest procedure, and handfuls of vastly outnumbered Spaniards did not bring down great empires
with stunning rapidity. Conquest realities were more complex--and far more fascinating--than conventional histories have related, and they featured a more diverse cast of protagonists-Spanish, Native American, and African. This updated edition of a key event in the history of the Americas critically
examines the book's arguments, how they have held up, and why they prompted the rise of a New Conquest History.