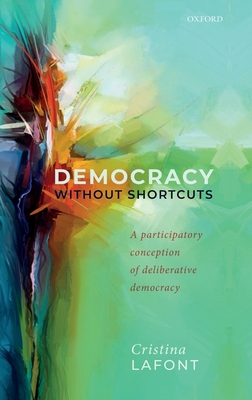 This book articulates a participatory conception of deliberative democracy that takes the democratic ideal of self-government seriously. It aims to improve citizens' democratic control and vindicate the value of citizens' participation against conceptions that threaten to undermine it. The
book critically analyzes deep pluralist, epistocratic, and lottocratic conceptions of democracy. Their defenders propose various institutional ''shortcuts'' to help solve problems of democratic governance such as overcoming disagreements, citizens' political ignorance, or poor-quality deliberation.
However, all these shortcut proposals require citizens to blindly defer to actors over whose decisions they cannot exercise control. Implementing such proposals would therefore undermine democracy. Moreover, it seems naive to assume that a community can reach better outcomes 'faster' if it bypasses
the beliefs and attitudes of its citizens. Unfortunately, there are no 'shortcuts' to make a community better than its members. The only road to better outcomes is the long, participatory road that is taken when citizens forge a collective will by changing one another's hearts and minds. However
difficult the process of justifying political decisions to one another may be, skipping it cannot get us any closer to the democratic ideal. Starting from this conviction, the book defends a conception of democracy ''without shortcuts''. This conception sheds new light on long-standing debates about
the proper scope of public reason, the role of religion in politics, and the democratic legitimacy of judicial review. It also proposes new ways to unleash the democratic potential of institutional innovations such as deliberative minipublics.

Cristina Lafont, Harold H. and Virginia Anderson Professor of Philosophy and Chair, Department of Philosophy, Northwestern University Cristina Lafont is Harold H. and Virginia Anderson Professor of Philosophy at Northwestern University, where she is Chair of the philosophy department and Director of the Program in Critical Theory. She is the author of Global Governance and Human Rights (Amsterdam, 2012), Heidegger, Language, andWorld-disclosure (Cambridge, 2000), The Linguistic Turn in Hermeneutic Philosophy (MIT, 1999), and co-editor of Critical Theory in Critical Times: Transforming the Global Political and Economic Order (Columbia, 2017) and the Habermas Handbook (Columbia, 2017). She received her Ph.D. in 1992 from theUniversity of Frankfurt. In 2011 she held the Spinoza Chair at the University of Amsterdam and in 2012/13 she was Fellow at the Institute for Advanced Study in Berlin.