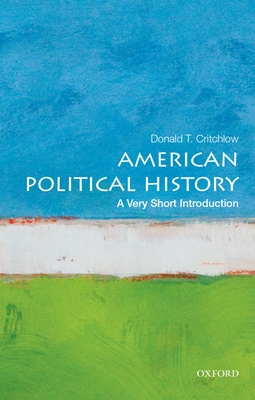 The Founding Fathers who drafted the United States Constitution in 1787 distrusted political parties, popular democracy, centralized government, and a strong executive office. Yet the country's national politics have historically included all those features. In American Political History: A
Very Short Introduction, Donald Critchlow takes on this contradiction between original theory and actual practice. This brief, accessible book explores the nature of the two-party system, key turning points in American political history, representative presidential and congressional elections,
struggles to expand the electorate, and critical social protest and third-party movements. The volume emphasizes the continuity of a liberal tradition challenged by partisan divide, war, and periodic economic turmoil. American Political History: A Very Short Introduction explores the emergence of a democratic political culture within a republican form of government, showing the mobilization and extension of the mass electorate over the lifespan of the country. In a nation characterized by great racial, ethnic,
and religious diversity, American democracy has proven extraordinarily durable. Individual parties have risen and fallen, but the dominance of the two-party system persists. Fierce debates over the meaning of the U.S. Constitution have created profound divisions within the parties and among voters,
but a belief in the importance of constitutional order persists among political leaders and voters. Americans have been deeply divided about the extent of federal power, slavery, the meaning of citizenship, immigration policy, civil rights, and a range of economic, financial, and social policies.
New immigrants, racial minorities, and women have joined the electorate and the debates. But American political history, with its deep social divisions, bellicose rhetoric, and antagonistic partisanship provides valuable lessons about the meaning and viability of democracy in the early 21st century. ABOUT THE SERIES: The Very Short Introductions series from Oxford University Press contains hundreds of titles in almost every subject area. These pocket-sized books are the perfect way to get ahead in a new subject quickly. Our expert authors combine facts, analysis, perspective, new ideas, and
enthusiasm to make interesting and challenging topics highly readable.

Donald T. Critchlow is Professor of History at Arizona State University. He is the author of When Hollywood Was Right: How Movie Moguls, Film Stars, and Big Business Remade American Politics to be published by Cambridge University Press. In addition, he has authored and edited many other booksincluding The Conservative Ascendancy: How the GOP Made Political History (Harvard, 2007; revised 2011, Kansas); Phyllis Schlafly and Grassroots Conservatism (Princeton, 2005; paper 2007); and Intended Consequences: Birth Control, Abortion, and the Federal Government (Oxford, 1999, pap. 2001). Heis currently working on a book American Democracy Now and Its Future, a data-driven book. He is editor of the Journal of Policy History, an interdisciplinary quarterly published by Cambridge University Press.