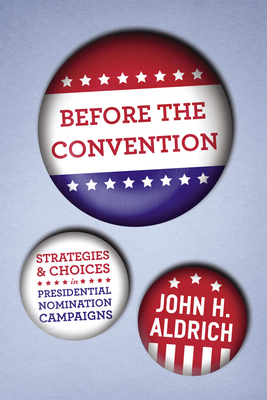 By John H. Aldrich
Email or call for price

Campaigns to win the Democratic and Republican presidential nominations are longer, more complex, and more confusing to the observer than the general election itself. The maze of delegate-selection procedures includes state primaries and caucuses as well as the traditional "smoke-filled room." Complicated federal election laws govern campaign financing. Sometimes many candidates enter and drop out of the race, while sometimes a stable two-way contest occurs: the 1976 nomination campaigns of Jimmy Carter and Gerald Ford exemplified each extreme. Is it possible to propose general principles to explain the apparent chaos of our presidential nomination system? Can those principles account for two such starkly different campaigns as occurred in 1976? In Before the Convention, political scientist John H. Aldrich presents a systematic analysis of presidential nomination politics, based on application of rational-choice models to candidate behavior. Aldrich views the candidates as decision makers with limited resources in a highly competitive environment. From this perspective, he seeks to determine why and how candidates choose to run, why some succeed and others fail, and what consequences the nomination process has for the general election and, later, for the President in office.

Aldrich begins with a brief history of the presidential selection process, focusing on the continuing shift of power from political elites to the mass electorate. He then turns to a detailed analysis of the 1976 nomination campaigns. Using data from a variety of sources, Aldrich demonstrates that the very different patterns in these races both conform to the rational-choice model. The analysis includes consideration of numerous questions of strategy. Is there a "momentum" to campaigns? How does a candidate identify and exploit this intangible quality? How do candidates decide where to contend and where not to contend? What is the nature of policy competition among candidates? When does a candidate prefer a "fuzzy" position to a clearly stated one? Other topics include reforms in campaign financing and the expanded and changed role of news coverage.

Before the Convention fills a significant gap in the literature on presidential politics, and therefore should be of particular importance to specialists in this area. It will be ofinterest also to everyone who is concerned with understanding the "rules of the game" for a complicated but vitally important exercise of American democracy.

John H. Aldrich is the Pfizer-Pratt University Professor of Political Science at Duke University. He is the author or coauthor of numerous books and a fellow of the American Academy of Arts and Sciences.