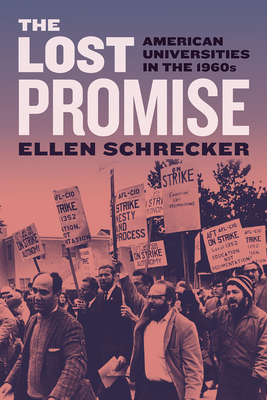 The Lost Promise is a magisterial examination of the turmoil that rocked American universities in the 1960s, with a unique focus on the complex roles played by professors as well as students.

The 1950s through the early 1970s are widely seen as American academia’s golden age, when universities—well funded and viewed as essential for national security, economic growth, and social mobility—embraced an egalitarian mission. Swelling in size, schools attracted new types of students and professors, including radicals who challenged their institutions’ calcified traditions. But that halcyon moment soon came to a painful and confusing end, with consequences that still afflict the halls of ivy. In The Lost Promise, Ellen Schrecker—our foremost historian of both the McCarthy era and the modern American university—delivers a far-reaching examination of how and why it happened.

Schrecker illuminates how US universities’ explosive growth intersected with the turmoil of the 1960s, fomenting an unprecedented crisis where dissent over racial inequality and the Vietnam War erupted into direct action. Torn by internal power struggles and demonized by conservative voices, higher education never fully recovered, resulting in decades of underfunding and today’s woefully inequitable system. As Schrecker’s magisterial history makes blazingly clear, the complex blend of troubles that disrupted the university in that pivotal period haunts the ivory tower to this day.

Ellen Schrecker is a retired professor of history at Yeshiva University and the author of numerous books, including No Ivory Tower: McCarthyism and the Universities, Many Are the Crimes: McCarthyism in America, and The Lost Soul of Higher Education: Corporatization, the Assault on Academic Freedom, and the End of the American University.

“A powerful presentation, personal yet balanced, of an important time in recent US history. Required reading for anyone eager to understand the complex forces shaping American higher education. . . . Schrecker presents a clear picture of a tumultuous decade, synthesizing her vast research in the era’s newspapers and journals and extensive interviews.”

"The Lost Promise is a distinctive history. By keeping her focus on university and college campuses and those who lived, studied and worked there the author has created a panoramic narrative that connects the upsurge in campus political activity with the fast-changing world of the 1960s and early 1970s. She seamlessly weaves the politics and culture of the period into the fabric of upheaval and change experienced in academia."
— Counterpunch

“For some, the ‘60s were a time of troubles when universities failed in their mission of ‘indoctrination of the young’. Others saw escape from indoctrination as a long step towards civilizing a conformist society. Ellen Schrecker’s careful and enlightening account of the universities in the ‘long sixties’ unravels many of the complexities of these turbulent years and their dramatic impact on American society and culture.”
— Noam Chomsky, Massachusetts Institute of Technology

"In her new, deeply researched book, Ellen Schrecker has done a superb job excavating faculty and administrative moves during the 1960s, especially in her detailed work on what  happened on several campuses usually left unexplored elsewhere. This is essential reading for anyone who wants to grasp the interplay of campus forces as the universities fell from Cold War grace. One need not fully embrace her brilliant idea that the universities’  failure to reach consensus in that decade incapacitated them to withstand the fierce political pressures that battered the universities in subsequent decades—for myself, I don’t see how such a consensus was achievable—to learn from and appreciate this splendid work of scholarship."
— Todd Gitlin, Columbia University

"Ellen Schrecker, the doyen of the political history of higher education, has produced another masterpiece. The Lost Promise debunks the popular image of the 1960s university as one of unremitting student rebellion, wild-eyed tenured radicals, and cowering administrators. The truth is more complicated and far more interesting. Instead, universities were sites of intense struggles over democracy, war, race, sex, corporate power, and mostly over the university itself: the battle over pedagogy, academic freedom, disciplines, relations between knowledge and social movements, and how to pay for higher education. Schrecker’s deeply researched, authoritative, and sobering account demonstrates how the dream of radicalizing academia was crushed—hastened by financial crises and largely politically-motivated disinvestment—ushering in today’s neoliberal university."

“In this monumental and gripping work, Schrecker shows that to understand the challenges facing higher education today we must grasp the nettle of the 1960s. The Lost Promise provides peerless illumination of the era that so shaped our own. It should be read by everyone in—or concerned about—the state of our embattled colleges and universities.”
— Nancy MacLean, Duke University

“The Lost Promise is a thunderous exclamation mark to a brilliant career that further cements Schrecker’s status among the very finest historians of America’s twentieth century. Impressive in its scope, uncanny in its research, and gorgeously written, this book is a true tour de force.”

"The Lost Promise is the most thorough analysis of higher education during that consequential decade. . . . Moving beyond the predictable attacks from the Right, Schrecker delivers one of the most ambitious indictments against the academy from centrists and liberals by highlighting their culpability as internal agents in the downfall of the once revered ivory tower."
— American Education History Journal

"The Lost Promise is an indispensable and comprehensive survey of higher education in the 1960s, but it also shows us a possible way forward if we choose to take it."
— Academe