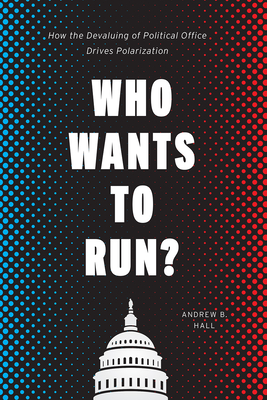 By Andrew B. Hall
Email or call for price

The growing ideological gulf between Democrats and Republicans is one of the biggest issues in American politics today. Our legislatures, composed of members from two sharply disagreeing parties, are struggling to function as the founders intended them to.  If we want to reduce the ideological gulf in our legislatures, we must first understand what has caused it to widen so much over the past forty years.

Andrew B. Hall argues that we have missed one of the most important reasons for this ideological gulf: the increasing reluctance of moderate citizens to run for office.  While political scientists, journalists, and pundits have largely focused on voters, worried that they may be too partisan, too uninformed to vote for moderate candidates, or simply too extreme in their own political views, Hall argues that our political system discourages moderate candidates from seeking office in the first place. Running for office has rarely been harder than it is in America today, and the costs dissuade moderates more than extremists. Candidates have to wage ceaseless campaigns, dialing for dollars for most of their waking hours while enduring relentless news and social media coverage. When moderate candidates are unwilling to run, voters do not even have the opportunity to send them to office. To understand what is wrong with our legislatures, then, we need to ask ourselves the question: who wants to run?  If we want more moderate legislators, we need to make them a better job offer.

Andrew B. Hall is associate professor of political science at Stanford University.