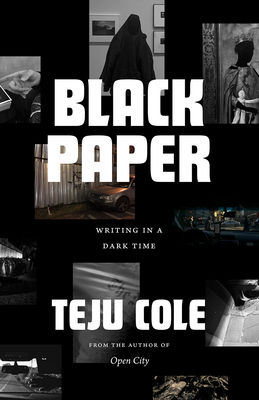 A profound book of essays from a celebrated master of the form.

“Darkness is not empty,” writes Teju Cole in Black Paper, a book that meditates on what it means to sustain our humanity—and witness the humanity of others—in a time of darkness. One of the most celebrated essayists of his generation, Cole here plays variations on the essay form, modeling ways to attend to experience—not just to take in but to think critically about what we sense and what we don’t.

Wide-ranging but thematically unified, the essays address ethical questions about what it means to be human and what it means to bear witness, recognizing how our individual present is informed by a collective past. Cole’s writings in Black Paper approach the fractured moment of our history through a constellation of interrelated concerns: confrontation with unsettling art, elegies both public and private, the defense of writing in a time of political upheaval, the role of the color black in the visual arts, the use of shadow in photography, and the links between literature and activism. Throughout, Cole gives us intriguing new ways of thinking about blackness and its numerous connotations. As he describes the carbon-copy process in his epilogue: “Writing on the top white sheet would transfer the carbon from the black paper onto the bottom white sheet. Black transported the meaning.”

Teju Cole is a novelist, photographer, critic, curator, and the author of seven books, which include Open City, Blind Spot, and Golden Apple of the Sun. He was the photography critic of the New York Times Magazine from 2015 until 2019. A 2018 Guggenheim Fellow, he is currently the Gore Vidal Professor of the Practice of Creative Writing at Harvard.

"What we see is an individual taking stock of their surroundings, a mode that Cole has mastered. To read this book is to enjoy the generosity of his thought, to be invited into a contemplation of your inner life, to embrace the complexity of others, and to see in the darkness not only despair but also understanding and even refuge.”
— Simukai Chigudu

"A collection of essays that bursts with unrestrained humanity. . . . Cole’s eighth book is technically excellent, and more importantly, it blazes a wholesome style to living and being alive. It holds many truths, some conflicting, because this is what humanity is."
— Open Country

“This collection of Cole’s feels rawer and more personal than those that have come before—Blind Spot and Known and Strange Things—layering as it does his art essays with homages to lost friends and analysis of his own 2012 novel, Open City. . . . The feeling of sadness that obviously motivated the [newest] essays, the feeling of being weighed down by all one is called to see—the phrase is bearing witness, after all—is made lighter by the example of other artists, the potential for joy in sensing all the world is."

"The novelist and critic travels through genres and across the globe in these thoughtful, powerful essays about the lives of migrants and man’s inhumanity."
— Observer

"In essays ranging on topics from Edward Said to the US-Mexico border to 'Black Panther,' Cole interrogates what it means to bear witness in a turbulent world."
— New York Times

“Black Paper is not simply a collection. There is an identifiable through-line which brings these multiple essays together into a unified text: namely, a reckoning with aesthetic experience when one is surrounded by darkness. If impaired vision is the issue in his earlier Blind Spot, total loss of sight is what is at stake here. Can we become comfortable seeing in the dark, or even seeing darkness and welcoming what is there to be found? . . . Through the artful vehicle of his precise prose, Cole has arrested us. He has made us stop, ponder, and pay attention.”
— Los Angeles Review of Books

"The celebrated author of Open City explores the ways we retain our humanity and different ways of thinking about the colour black."
— Guardian

"The lingering tone of this collection is enigmatic but consolatory; a book for our troubling times. Black Paper reinforces the idea of Cole as a public intellectual, but one who works on his own terms."
— US Studies Online

”Cole asserts that we should make more expansive and subtle use of all our senses in taking in the world. Indeed, read as a whole, these stories ‘collectively argue for using our senses – interpreted as capaciously as possible – to respond to experience, embrace epiphany, and intensify our ethical commitments.’”

"From scrutiny of a colonial-era photograph in 'Restoring Darkness' to 'Experience,' in which he considers human senses and our cultural understandings, Cole's engaging collection of essays reassembles the visual kaleidoscope of life now in sharp, exacting prose. Cole should be seen and attentively read."
— Booklist

“In this erudite collection of observations written over the past three years, art historian Cole meditates on art, identity, politics, and literature to decipher ‘the fractured moment in our history.’ . . . Offering a window into his articulate worldview, Cole brings into sharp relief the very humanity he seeks.”

“Dense and provocative, the essays in Black Paper are a reminder that darkness cannot last forever, and even within it, there is meaning and hope.”

“[Teju Cole is] an emissary for our best selves. He is sampling himself for our benefit, hoping for enlightenment, and seeking to provide pleasure to us through his art. May his realm expand.”

“The places he can go, you feel, are just about limitless.”

— Dwight Garner, New York Times, on Every Day Is for the Thief

“He takes in news from African countries and American cities; but also, by necessity and interest, Asian, European and Latin American culture and history. In short, the world belongs to Cole and is thornily and gloriously allied with his curiosity and his personhood.”
— Claudia Rankine, New York Times Book Review, on Known and Strange Things

“The forms of resistance depend on the culture they resist, and in our era of generalizations and approximations and sloppiness, Teju Cole’s precise and vivid observation and description is an antidote and a joy. This is a book written with a scalpel, a microscope, and walking shoes, full of telling details and sometimes big surprises.”
— Rebecca Solnit, on Known and Strange Things

"Cole’s erudition, eclecticism, and empathy are remarkable, but it is his capacity for lyrical writing that stays with the reader and marks him out as one of the most significant cultural figures of our times."
— Tortoise

"Cole deftly warps and wefts his engagements with 17th-century painter Caravaggio, starting in the 1970s–80s as a boy in Lagos, Nigeria and later as a journalist traveling to view as many of the artist's works as possible during the immigration crisis in Italy that has swept up so many asylum seekers from Africa. Elegantly and urgently, Cole brings readers full circle. What links the essays in the book is Cole’s understanding that people 'make images in response to disaster. Seeing is part of . . . coming to terms.' He importunes readers to reach beyond tragedy and discover a new language. . . . Highly recommended."
— Choice