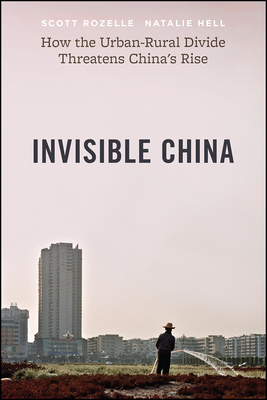 As the glittering skyline in Shanghai seemingly attests, China has quickly transformed itself from a place of stark poverty into a modern, urban, technologically savvy economic powerhouse. But as Scott Rozelle and Natalie Hell show in Invisible China, the truth is much more complicated and might be a serious cause for concern.

China’s growth has relied heavily on unskilled labor. Most of the workers who have fueled the country’s rise come from rural villages and have never been to high school. While this national growth strategy has been effective for three decades, the unskilled wage rate is finally rising, inducing companies inside China to automate at an unprecedented rate and triggering an exodus of companies seeking cheaper labor in other countries. Ten years ago, almost every product for sale in an American Walmart was made in China. Today, that is no longer the case. With the changing demand for labor, China seems to have no good back-up plan. For all of its investment in physical infrastructure, for decades China failed to invest enough in its people. Recent progress may come too late. Drawing on extensive surveys on the ground in China, Rozelle and Hell reveal that while China may be the second-largest economy in the world, its labor force has one of the lowest levels of education of any comparable country. Over half of China’s population—as well as a vast majority of its children—are from rural areas. Their low levels of basic education may leave many unable to find work in the formal workplace as China’s economy changes and manufacturing jobs move elsewhere.

In Invisible China, Rozelle and Hell speak not only to an urgent humanitarian concern but also a potential economic crisis that could upend economies and foreign relations around the globe. If too many are left structurally unemployable, the implications both inside and outside of China could be serious. Understanding the situation in China today is essential if we are to avoid a potential crisis of international proportions. This book is an urgent and timely call to action that should be read by economists, policymakers, the business community, and general readers alike.

Scott Rozelle is a senior fellow at the Freeman Spogli Institute for International Studies and holds the Helen F. Farnsworth Endowed Professorship at Stanford University. Rozelle codirects the Rural Education Action Program (REAP) and is a faculty affiliate at the Center on Democracy, Development, and the Rule of Law.


Natalie Hell is a writer and researcher. As part of REAP, she has worked on Chinese education and health issues for the past seven years.

"If rural Chinese do not learn essential cognitive skills, the authors predict mass unemployment, social unrest, and perhaps a crash that would 'lead to huge economic shocks around the world.' China’s rulers should order crates of de-worming pills—and copies of this book."
— Economist

"While the world focuses on China’s rich, the country is facing economic and political disaster if it doesn’t invest heavily in educating its rural population, the economists Scott Rozelle and Natalie Hell argue in this recent book. Both authors are part of the successful US-China Rural Education Action Program. As they note, Taiwan and South Korea escaped the middle-income trap by ensuring that large numbers of students finished high school, enabling the move to a higher-end economy. In China, by contrast, the high school attainment rate is just 30 percent."

"For a startling depiction of Chinese inequality today, Scott Rozelle and Natalie Hell’s Invisible China is not to be missed."
— Niall Ferguson

"The biggest obstacle to China’s development is that rural children—two-thirds of the total—do terribly in school, argues this stunningly researched book. Many are malnourished, lack reading glasses or suffer from energy-sapping intestinal worms. If these basic problems are not fixed, say the authors, China will struggle to reach its goal of broad prosperity."
— Economist, Best Books of 2021

“Rozelle… has spent the last 30 years researching China’s labor force and its rural-urban divide.”
— The Guardian

"An important and informative new book . . .  suggests that China lacks the educated workforce to capitalize on its success and reach the next rung in the ladder of development. . . . Making invisible China more visible is a necessary first step to bring meaningful changes in rural China. This new book by Rozelle and Hell is an important contribution to this endeavor."
— Peterson Institute for International Economics

"This book by development economist Scott Rozelle and researcher Natalie Hell highlights problems that often remain invisible in the face of China’s rapid economic rise. It’s the drama of the rural low-educated workers who were the motor driving China’s growth since the 1980s, but are now more and more left jobless and hopeless in their home villages as low-skilled work is increasingly outsourced to other countries or is taken over by robotics. In many ways, China and the Chinese people are going forward – yet the rural population is left behind, and it’s China’s Achilles’ heel. This book focuses on this invisible side to China’s rise and on how such a big story, with such major implications, could be so little known."
— What's on Weibo

“The authors are in no way hostile to China or its government system. But having spent years researching in rural China they not only feel strongly for this unseen China but want the situation to change so that China continues to prosper and thus enable the wider world to prosper.”
— Asia Sentinel

“Rozelle and Hell would like to see China succeed, and remind us how important this is for the whole world. But they are concerned with the slow progress in reforming education. China has recently become more authoritarian, limiting cooperation with the education systems of other countries and even restricting the foreign books that children can read. Invisible China sounds a wake-up call.”
— The Strategist

"Scott Rozelle and Natalie Hell published Invisible China in 2020 as the pandemic began. The book arrived just before a wave of new policy trends that emerged throughout 2021, and it offers important context for those trends. It serves as a useful window to readers who want to move beyond the cities of China and begin to explore the vast and complex rural interior of the country."
— China Source

"[Invisible China] provides an extensive coverage of problems for China in the sphere of human capital development... the book is rich in content and is not constrained only to China, but provides important parallels with past and present developments in other countries."
— Journal of Chinese Political Science

“This book… [examines] a [wide] range of problems regarding China’s performance not just in education but also in health outcomes.”
— Asian-Pacific Economic Literature

"Invisible China is an important, clearly argued, and original work. It presents a side of China that is all too evident to hundreds of millions of people living there, but that often escapes notice internationally. Anyone interested in China's economic and political future, and its impact on the world, will want to read this book."

“Professor Rozelle is a renowned economist specializing in early childhood education and rural development, and his book on rural China is a culmination of over twenty years of research on rural China, which has generated intense interest among policymakers and philanthropists. He convincingly argues that intervention into early childhood education is the most effective way of reducing the inequality that is a problem not only in rural China but in many parts of the world.”

“This is the most readable and compelling economics book of the year, and probably the most important. From the opening pages, a clear and compelling argument unfolds: China faces a labor quality crisis, as hundreds of millions of young rural workers lack the education and robust health they need to participate in China's emerging high tech economy. Nobody who cares about China can afford to ignore Invisible China.”
— Barry Naughton, School of Global Policy and Strategy, University of California, San Diego

“This book is an important contribution to the study of China. China’s size and linkages with other economies mean that the arguments and data presented here have wide-ranging importance. There is still time to avoid the ‘doomsday’ outcome if policy shifts in China, and Rozelle and Hell’s work is poised to have a real impact if its message is heeded.”—Pietra Rivoli, Georgetown University

"[Invisible China] examines the impending challenge of China’s rural poverty and the mechanisms that have allowed it to develop, promoting concrete actions that China can take to reduce the humanitarian risks of its urban–rural divide."
— Journal of Economic Literature

"The book... delivers a solid analysis, and provides clear and feasible policy recommendations... a must-read both for scholars interested in Chinese studies and for policymakers."
— Europe-Asia Studies

"Rozelle and Hell have written an eloquent description and analysis of China’s growing social challenge."
— The Developing Economies

"Invisible China works extremely well as a source of inspiration for students, researchers, and practitioners wanting to work with rural China."
— Pacific Affairs