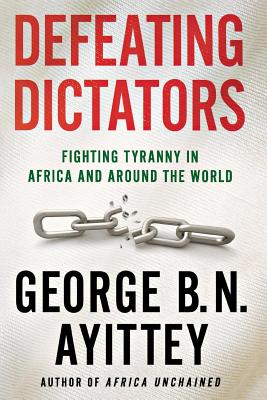 The recent turmoil in North Africa and the Middle East disproves the idea that dictatorships are acceptable to the people of these nations. From the uprising in Tunisia to the overthrow of Egypt's Hosni Mubarak and rebellion across the region, the tide is turning against oppressive regimes. In this timely and urgent narrative, White House advisor on Africa George Ayittey takes a hard look at the fight against dictatorships around the world, from Eastern Europe in the twentieth century to the present turmoil in the Middle East. He describes the historic circumstances that led to the rise of brutal dictators and explains how, despite the best intentions and billions of dollars in aid, Western governments have been complicit in helping dictators consolidate power. He not only shows how the popular uprisings underway can best bring about democracy, but warns how democratic movements can inadvertently pave the way for more dictators. Ayittey examines strategies that have worked in the struggle to establish democracy through revolution, and suggests that by harnessing the power of democratic institutions and grassroots efforts, Africans can bring stability and security to the continent.

Dr. George Ayittey was named one of Foreign Policy’s Top Global Thinkers in 2009 and is an advisor to the Obama administration on forging a new path for Africa. He is the author of Africa Unchained, Africa in Chaos, and Africa Betrayed, which won the H.L. Mencken Award for Best Book. Ayittey has written for The Wall Street Journal, The Washington Post, and The Times of London, among others, and has appeared on such media as ABC Nightline, PBS NewsHour, and CNN. He is also the founder and president of the Free Africa Foundation and professor of economics at American University.

“As George Ayittey, Obama adviser and veteran Africa author and analyst, knows too well…there is far more to ousting dictators than convening a crowd, as in Tahrir Square…There are few greater experts in the nature of and flaws of tyranny [than Ayittey]. His record in opposing authoritarian misrule in his native Ghana is unimpeachable.…All those labouring under authoritarian systems that seem invulnerable, from Zimbabwe to Jordan and even maybe China, should heed Ayittey's strictures. So should their rulers. So too should western officials tempted to water down their principles when working in illiberal regimes.” —Alec Russell, Financial Times