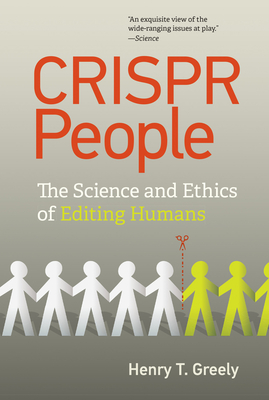 What does the birth of babies whose embryos had gone through genome editing mean--for science and for all of us?

In November 2018, the world was shocked to learn that two babies had been born in China with DNA edited while they were embryos—as dramatic a development in genetics as the 1996 cloning of Dolly the sheep. In this book, Hank Greely, a leading authority on law and genetics, tells the fascinating story of this human experiment and its consequences. Greely explains what Chinese scientist He Jiankui did, how he did it, and how the public and other scientists learned about and reacted to this unprecedented genetic intervention.

The two babies, nonidentical twin girls, were the first “CRISPR'd” people ever born (CRISPR, Clustered Regularly Interspaced Short Palindromic Repeats, is a powerful gene-editing method). Greely not only describes He's experiment and its public rollout (aided by a public relations adviser) but also considers, in a balanced and thoughtful way, the lessons to be drawn both from these CRISPR'd babies and, more broadly, from this kind of human DNA editing—“germline editing” that can be passed on from one generation to the next.

Greely doesn't mince words, describing He's experiment as grossly reckless, irresponsible, immoral, and illegal. Although he sees no inherent or unmanageable barriers to human germline editing, he also sees very few good uses for it—other, less risky, technologies can achieve the same benefits. We should consider the implications carefully before we proceed.

“CRISPR People is an accessible, clearly written, fact-filled analysis of a new biological frontier. Readers will come away not only with a deep understanding of CRISPR and how it works, but also with an appreciation of how a Chinese scientist created the first gene-edited humans and what that means for the rest of us. Greely believes that He’s experiment was nothing less than ‘a cross between bad fiction and reckless fiasco, shrouded in a deep fog of secrets.’'"—the Washington Post

"Packed with facts and analysis, Henry Greely’s CRISPR People examines what He did, explains why Greely believes it was wrong, describes the world’s reaction, and details what we can and should do about work like this in the future...Greely provides an exquisite view of the wide-ranging issues at play in this particular case."
—Science

"A serious and scholarly work."
—The Economist

"Greely, one of the US’ most-cited bioethicists, has spent close to a decade contemplating how society might handle gene-edited humans. But the He Jiankui affair cast his many nebulous concerns into concrete form. In this book, which he says lies “somewhat uneasily between history and journalism,” Greely goes deep into the aftermath of the 2018 revelations and lays out in lawyerly detail the big questions now facing the future of Crispr technology."
—WIRED

"What does it mean to rebuild people through gene editing or other medical interventions? CRISPR People by Henry T. Greely, an ethics and law professor at Stanford University in California, dives in at the deep end with the story of non-identical twin girls who were born in 2018 in China with their DNA edited as embryos. For Greely, the experiment by Chinese scientist He Jiankui that enabled this was reckless and illegal, using technologies that have no extra benefits over existing ones, and is something we should ponder carefully."
—New Scientist

"Greely describes the science, ethics and legal framework of genome editing before CRISPR; how that technology changed the game; what He Jiankui actually did in the laboratory, as far as we know; and how the world responded to the news of the births of genome-edited twins in 2018...Greely argues that human genome editing isn’t inherently wrong, but it can be under certain circumstances — for instance, if used under coercion or before it’s shown to be reasonably safe, or if it reduces genetic diversity (unlikely) or increases social inequality (quite probable). Where Greely stands out is his clear and detailed discussion of situations in which germline genome editing in humans would actually be necessary. His conclusion, shared with commentators is that they would be very rare, either because there are good alternatives or because, in the cases that might call for it, genome editing would be unlikely to work at all."
—Nature

"Greely employs a personal narration, storytelling style, laced with humorous quips, analogies, and informative biographies of participants. He deliberately builds his scientific, legal, and ethical arguments to inform novice and advanced readers from various disciplines and includes generous supporting citations. The result is a highly accessible text appropriate for all interested readers."
—CHOICE