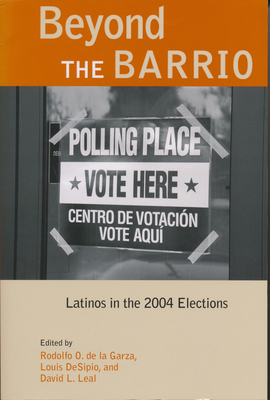 Beyond the Barrio: Latinos in the 2004 Elections analyzes the mobilization of Latino voters at the state and national levels during the 2004 campaign and the efforts of Latino communities to influence electoral outcomes. The volume is the most recent installment in the quadrennial analyses of Latinos and national elections begun in 1988 by Rodolfo de la Garza and Louis DeSipio. This ongoing project is the only scholarly effort to track the emergence of Latino influence in U.S. politics over the last two decades.

The volume examines how and when Latinos were the focus of candidate/campaign mobilization, how Latinos themselves organized to influence electoral outcomes, and where and under what circumstances they succeeded. In addition to state-level analyses, Beyond the Barrio presents an analytical overview of the national presidential campaign that includes measures of Latino influence and a review of state and local contests that led to the election of Latino officials. It also extends the analysis to states with small Latino populations that are just beginning to organize. The editors consider 2004 as a signpost election, in which both major parties began a transition from symbolic gestures toward Latino voters to more serious, issue-related efforts to court the Latino vote.

The expertise of the contributors ensures that Beyond the Barrio avoids simple generalizations about the Latino vote and illustrates its complexity, as well as the opportunities and challenges faced by Latino voters and Latino leaders.

David L. Leal is associate professor of Government and Director of the Irma Rangel Public Policy Institute at the University of Texas at Austin.