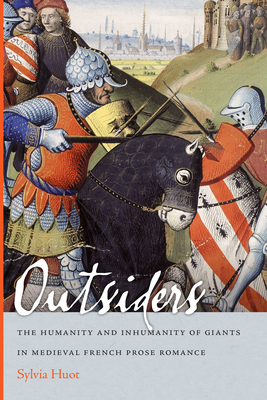 By Sylvia Huot
Email or call for price

Giants are a ubiquitous feature of medieval romance. As remnants of a British prehistory prior to the civilization established, according to the Historium regum Britannie, by Brutus and his Trojan followers, giants are permanently at odds with the chivalric culture of the romance world. Whether they are portrayed as brute savages or as tyrannical pagan lords, giants serve as a limit against which the chivalric hero can measure himself. In Outsiders: The Humanity and Inhumanity of Giants in Medieval French Prose Romance, Sylvia Huot argues that the presence of giants allows for fantasies of ethnic and cultural conflict and conquest, and for the presentation--and suppression--of alternative narrative and historical trajectories that might have made Arthurian Britain a very different place. Focusing on medieval French prose romance and drawing on aspects of postcolonial theory, Huot examines the role of giants in constructions of race, class, gender, and human subjectivity. She selects for study the well-known prose Lancelot and the prose Tristan, as well as the lesser known Perceforest, Le Conte du papegau, Guiron le Courtois, and Des Grantz Geants. By asking to what extent views of giants in Arthurian romance respond to questions that concern twenty-first-century readers, Huot demonstrates the usefulness of current theoretical concepts and the issues they raise for rethinking medieval literature from a modern perspective.

Sylvia Huot is professor of medieval French literature and a Fellow of Pembroke College, University of Cambridge.