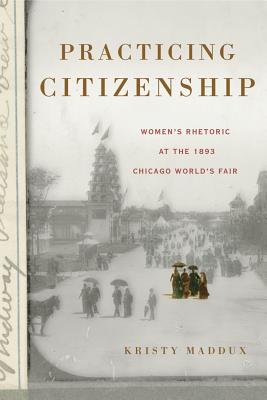 By Kristy Maddux
Email or call for price

By 1893, the Supreme Court had officially declared women to be citizens, but most did not have the legal right to vote. In Practicing Citizenship, Kristy Maddux provides a glimpse at an unprecedented alternative act of citizenship by women of the time: their deliberative participation in the Chicago World's Fair of 1893.

Hailing from the United States and abroad, the more than eight hundred women speakers at the World's Fair included professionals, philanthropists, socialites, and reformers addressing issues such as suffrage, abolition, temperance, prison reform, and education. Maddux examines the planning of the event, the full program of women speakers, and dozens of speeches given in the fair's daily congresses. In particular, she analyzes the ways in which these women shaped the discourse at the fair and modeled to the world practices of democratic citizenship, including deliberative democracy, racial uplift, organizing, and economic participation. In doing so, Maddux shows how these pioneering women claimed sociopolitical ground despite remaining disenfranchised.

This carefully researched study makes significant contributions to the studies of rhetoric, American women's history, political history, and the history of the World's Fair itself. Most importantly, it sheds new light on women's activism in the late nineteenth century; even amidst the suffrage movement, women innovated practices of citizenship beyond the ballot box.

Kristy Maddux is Associate Professor of Communication at the University of Maryland. She is the author of the award-winning book The Faithful Citizen: Popular Christian Media and Gendered Civic Identities.