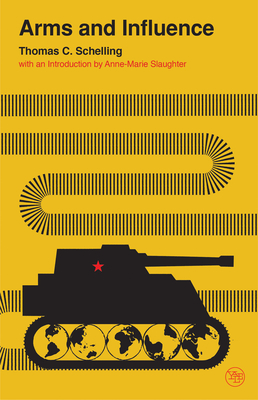 “This is a brilliant and hardheaded book. It will frighten those who prefer not to dwell on the unthinkable and infuriate those who have taken refuge in stereotypes and moral attitudinizing.”—Gordon A. Craig, New York Times Book Review

"A grim but carefully reasoned and coldly analytical book. . . . One of the most frightening previews which this reviewer has ever seen of the roads that lie just ahead in warfare."—Los Angeles Times

Originally published more than fifty years ago, this landmark book explores the ways in which military capabilities—real or imagined—are used, skillfully or clumsily, as bargaining power. Anne-Marie Slaughter’s new introduction to the work shows how Schelling’s framework—conceived of in a time of superpowers and mutually assured destruction—still applies to our multipolar world, where wars are fought as much online as on the ground.

Thomas C. Schelling (1921–2016) was Distinguished University Professor, Department of Economics and School of Public Affairs, University of Maryland. He was corecipient of the 2005 Nobel Prize in Economics. Anne-Marie Slaughter is President and CEO of New America, former Director of Policy Planning at the U. S. State Department, and former Dean of Princeton’s Woodrow Wilson School of Public and International Affairs.

"This is a brilliant and hardheaded book. It will frighten those who prefer not to dwell on the unthinkable and infuriate those who have taken refuge in stereotypes and moral attitudinizing."—Gordon A. Craig, New York Times Book Review


"An exemplary text on the interplay of national purpose and military force."—Eric Larrabee, Book Week


"Well worth reading and there will be few who do so that do not find an idea or line of inquiry emerging in their own later thinking that owes its inspiration to Professor Schelling's lively analysis."—American Political Science Review

"Of great value especially to people who are relative newcomers to the field . . . it has, like everything of Schelling's, some quite novel and original ideas."—Bernard Brodie