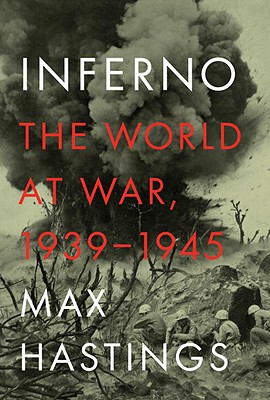 From one of our finest military historians, a monumental work that shows us at once the truly global reach of World War II and its deeply personal consequences.

World War II involved tens of millions of soldiers and cost sixty million lives—an average of twenty-seven thousand a day. For thirty-five years, Max Hastings has researched and written about different aspects of the war. Now, for the first time, he gives us a magnificent, single-volume history of the entire war.

Through his strikingly detailed stories of everyday people—of soldiers, sailors and airmen; British housewives and Indian peasants; SS killers and the citizens of Leningrad, some of whom resorted to cannibalism during the two-year siege; Japanese suicide pilots and American carrier crews—Hastings provides a singularly intimate portrait of the world at war. He simultaneously traces the major developments—Hitler’s refusal to retreat from the Soviet Union until it was too late; Stalin’s ruthlessness in using his greater population to wear down the German army; Churchill’s leadership in the dark days of 1940 and 1941; Roosevelt’s steady hand before and after the United States entered the war—and puts them in real human context.

Hastings also illuminates some of the darker and less explored regions under the war’s penumbra, including the conflict between the Soviet Union and Finland, during which the Finns fiercely and surprisingly resisted Stalin’s invading Red Army; and the Bengal famine in 1943 and 1944, when at least one million people died in what turned out to be, in Nehru’s words, “the final epitaph of British rule” in India.

Remarkably informed and wide-ranging, Inferno is both elegantly written and cogently argued. Above all, it is a new and essential understanding of one of the greatest and bloodiest events of the twentieth century.

Max Hastings is the author of more than twenty books, most recently "Winston's War." He has served as a foreign correspondent and as the editor of Britain's "Evening Standard" and "Daily Telegraph." He has received numerous British Press awards, including Journalist of the Year in 1982 and Editor of the Year in 1988. He lives outside London.

“A new, original, necessary history, in many ways the crowning of a life’s work. A professional war correspondent who has personally witnessed armed conflict in Vietnam, the Falkland Islands and other danger zones, Hastings has a sober, unromantic and realistic view of battle that puts him into a different category from the armchair generals whose gung-ho, schoolboy attitude to war fills the pages of a great majority of military histories. He writes with grace, fluency and authority . . . Inferno is superb.”
—Richard J. Evans, The New York Times Book Review

“If there is a contemporary British historian who is the chronicler of World War II, it would be Max Hastings . . . [Inferno] is a true distillation of everything this historian has learned from a lifetime of scholarship—and more important, of real thought—on what he calls ‘the greatest and most terrible event in human history.’”
—Martin Rubin, San Francisco Chronicle

“Compellingly different . . . a panoramic social history that not only recounts the military action with admirable thoroughness, crispness and energy but also tells the story of the people who suffered in the war, combatants and civilians alike.”
—Edward Kosner, The Wall Street Journal

“A relatively brief review can only begin to indicate the depth, breadth, complexity and pervasive humanity of this extraordinary book. The literature of World War II is, as Hastings notes at the beginning of his bibliography, so vast as almost to defy enumeration or comprehension, but “Inferno” immediately moves to the head of the list. It is in all ways a monumental achievement.”
—Jonathan Yardley, The Washington Post

“Inferno is a magnificent achievement, a one-volume history that should find favor among readers thoroughly immersed in World War II and those approaching the subject for the first time. As the years thin the ranks of those who fought in the war, Hastings’s balanced and elegantly written prose should help ensure that the bloodshed, bravery and brutality of that tragic conflict aren't forgotten.”
—Jerry Harkavy, Associated Press

“Oddly enough, good single-volume histories of the war are relatively rare. By and large, its sheer scope intimidates writers: while there are hundreds of books about individual episode, from the Battle of Britain to D-Day, surprisingly few historians have tried to pull all the threads together. But Hastings, as the author of several splendid volumes on various aspects of the conflict, is the ideal candidate to conquer this historiographical Everest.  His book is at once a ‘global portrait,’ emphasizing events in Asia as well as in Europe, and a ‘human story,’ saturated in the details of ordinary people’s experience . . . . Hastings has a terrific grasp of the grand sweep and military strategy of the war, showing how a combination of Russian blood, American industry and German incompetence made the allied victory inevitable. But what makes this book so compelling are the human stories . . . . This is the book he was born to write: a work of staggering scope and erudition, narrated with supreme fluency and insight, it is unquestionably the best single-volume history of the war ever written.”
—Dominic Sandbrook, The Sunday Times

“Though the Second World War has been the subject of immense historical research, Max Hastings here demonstrates how much there is still to know. Using the techniques that served him so well in his earlier books on various aspects of the war, he now offers a fast-moving, highly readable survey of the entire war, in all its phases and on all fronts . . . Above all, this is the story of the war as experienced by ordinary men and women. Hastings draws on eye-witness accounts and anecdotes from soldiers of all armies to show graphically what the war was like for the ordinary people who fought it, and, overwhelmingly, how terrible it was for the combatants. While many of the frontline commanders of each of the belligerent powers come in for some harsh treatment for their ineptitude or bungling, the valour, heroism and, above all, the extraordinary stoicism of their troops amid scarcely imaginable pain, suffering and losses are repeatedly highlighted. This is military history at its most gripping. Of all Max Hastings’s valuable books, this is possibly his best—a veritable tour de force.”
—Ian Kershaw, The Evening Standard

“This book is packed with fascinating and surprising statistics and facts . . . . Hastings has an extraordinary ability to throw a bucket into the ocean of wartime papers, diaries, letters and documents of every kind, and bring up something fascinating and worthwhile every time.”
—Andrew Roberts, Financial Times

“[A] huge, majestic book . . . . The Second World War took place in the skies, the oceans and the lands of five different continents. It encompassed fighting in Arctic blizzards, as well as in jungles and deserts. Any military history must encompass all of this and more. And at the same time it must reconcile the grand strategy of generals and politicians with the more violent experiences of ordinary soldiers . . . Hastings shapes all these stories, almost miraculously, into a coherent narrative. Overlaid upon this tapestry is an analysis of how the war brought out the best and the worst in people, how it could be won only through the use of astonishing brutality and how it changed society forever.”
—Keith Lowe, The Telegraph

“[Hastings’s] nine books on aspects of [World War II] have given him a claim to be our pre-eminent military historian. In All Hell Let Loose he attempts to tell the whole story in a single volume, and succeeds triumphantly, combining fluid narrative with some piercing insights and unsentimental judgments . . . As this enthralling book shows, in the right hands, the study of war – like the study of sacred text – can generate and endless stream of new meanings and insights, illuminating in their turn the wider mysteries of existence.”
—Patrick Bishop, Standpoint