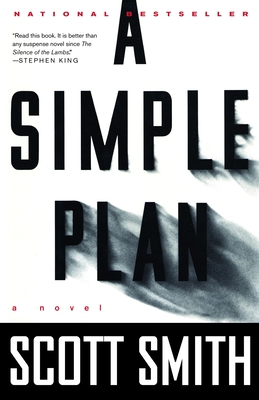 “Spectacular. . . . Ten shades blacker and several corpses grimmer than the novels of John Grisham. . . . Do yourself a favor. Read this book.” —Entertainment Weekly

Two brothers and their friend stumble upon the wreckage of a plane–the pilot is dead and his duffle bag contains four million dollars in cash. In order to hide, keep, and share the fortune, these ordinary men all agree to a simple plan.

Scott Smith was educated at Dartmouth College and Columbia University. He lives in New York City.

“Read this book. It is better than any suspense novel since The Silence of the Lambs.” —Stephen King

“Spectacular. . . . Ten shades blacker and several corpses grimmer than the novels of John Grisham. . . . Do yourself a favor. Read this book.” —Entertainment Weekly

“Beautifully controlled and disturbing. . . . Works a devastating variation on the idea of the banality of evil.” —The New York Times Book Review

“Like watching a train wreck. There is nothing to be done, but it is impossible to turn away.” —Chicago Tribune

“A marvel. . . . The story-twists keep you turning the pages and guessing what’s coming next. With cool precision, Smith outlines the ever-widening spiral of distrust and violence.” — The Boston Globe

“A work of deceptive simplicity and singular power. . . . To describe the fascinating parade of thoughts and deeds that lead inexorably to the book’s calamitous conclusion would give away too much of the plot.” — The Washington Post