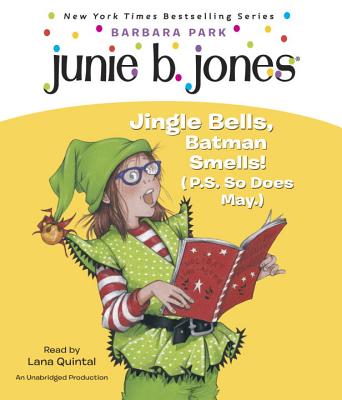 This is book number 25 in the Junie B. Jones series.

Ho, ho...uh-oh! With over 50 million books in print, Barbara Park's New York Times bestselling chapter book series, Junie B. Jones, is a classroom favorite and has been keeping kids laughing—and reading—for over 20 years! In the 25th Junie B. Jones book, it’s holiday time, and Room One is doing lots of fun things to celebrate. Like making elf costumes! And singing joyful songs! Only, how can Junie B. enjoy the festivities when Tattletale May keeps ruining her holiday glee? And here is the worst part of all! When everyone picks names for Secret Santa, Junie B. gets stuck with Tattletale you-know-who! It’s enough to fizzle your holiday spirit! Hmm . . . or is it? Maybe, just maybe, a Secret Santa gift is the perfect opportunity to give May exactly what she deserves.

USA TODAY:
"Junie B. is the darling of the young-reader set."

Kirkus Reviews:
"Junie's swarms of young fans will continue to delight in her unique take on the world….A hilarious, first-rate read-aloud."

Time Magazine:
"Junie B. Jones is a feisty six-year-old with an endearing penchant for honesty."

BARBARA PARK is best known as the author of the wildly popular New York Times bestselling Junie B. Jones series, which has kept kids (and their grown-ups) laughing—and reading—for over two decades. Beloved by millions, the Junie B. Jones books have been translated into multiple languages and are a time-honored staple in elementary school classrooms around the world. Barbara once said, “I’ve never been sure whether Junie B.’s fans love her in spite of her imperfections…or because of them. But either way, she’s gone out into the world and made more friends than I ever dreamed possible.”

Barbara Park is also the author of award-winning middle grade novels and bestselling picture books, including Skinnybones, Mick Harte Was Here, and Ma! There’s Nothing to Do Here!

Barbara Park was born in New Jersey in 1947 and spent most of her adult life in Arizona, where she and her husband, Richard, raised two sons. Barbara died in 2013, but her legacy lives on in the laughter her books give to readers all over the world.

From USA TODAY:
"Junie B. is the darling of the young-reader set."

From Kirkus Reviews:
"Junie's swarms of young fans will continue to delight in her unique take on the world....A hilarious, first-rate read- aloud."

From Booklist:
"Park, one of the funniest writers around . . . brings her refreshing humor to the beginning chapter-book set."

From Time magazine:
"Junie B. Jones is a feisty six-year-old with an endearing penchant for honesty."

From School Library Journal:
"Readers will relate instantly to the trials and tribulations of this first grader....She is always endearing and wonderfully funny."