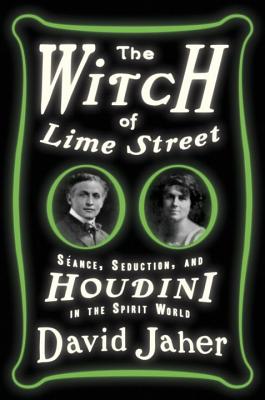 It’s been quite a while since a book captured my attention as much as this one did. Part history, biography, ghost story, and mystery, The Witch of Lime Street is an elusive riddle of a story, blurring the lines that separate fact from fiction and truth from trickery. Like the so-called witch herself, it is enchanting, enigmatic, puzzling, elegant, and seductive, beckoning us into a dark and smoky séance room with a sly smile and a charming twinkle in the eye. Inside, debut author David Jaher takes us back to a time when science was flirting with the paranormal and the world was watching with bated breath. His account of the modern Spiritualist movement is impeccably researched and utterly spellbinding, and I can hardly wait to read it again.

History comes alive in this textured account of the rivalry between Harry Houdini and the so-called Witch of Lime Street, whose iconic lives intersected at a time when science was on the verge of embracing the paranormal.

The 1920s are famous as the golden age of jazz and glamour, but it was also an era of fevered yearning for communion with the spirit world, after the loss of tens of millions in the First World War and the Spanish-flu epidemic. A desperate search for reunion with dead loved ones precipitated a tidal wave of self-proclaimed psychics--and, as reputable media sought stories on occult phenomena, mediums became celebrities. Against this backdrop, in 1924, the pretty wife of a distinguished Boston surgeon came to embody the raging national debate over Spiritualism, a movement devoted to communication with the dead. Reporters dubbed her the blonde Witch of Lime Street, but she was known to her followers simply as Margery. Her most vocal advocate was none other than Sherlock Holmes' creator Sir Arthur Conan Doyle, who believed so thoroughly in Margery's powers that he urged her to enter a controversial contest, sponsored by Scientific American and offering a large cash prize to the first medium declared authentic by its impressive five-man investigative committee. Admired for both her exceptional charm and her dazzling effects, Margery was the best hope for the psychic practice to be empirically verified. Her supernatural gifts beguiled four of the judges. There was only one left to convince...the acclaimed escape artist, Harry Houdini. David Jaher's extraordinary debut culminates in the showdown between Houdini, a relentless unmasker of charlatans, and Margery, the nation's most credible spirit medium. The Witch of Lime Street, the first book to capture their electric public rivalry and the competition that brought them into each other's orbit, returns us to an oft-mythologized era to deepen our understanding of its history, all while igniting our imagination and engaging with the timeless question: Is there life after death?

DAVID JAHER received a BA from Brandeis University and an MFA in film production from New York University. At NYU, he was the recipient of the WTC Johnson Fellowship for directing. A New York native and resident, he is a screenwriter and is writing his next work of American history.
My Account • Sign In • Sign Out • Register
NEW & USED BOOKS
AUTHOR EVENTS • GIFTS
Changing Hands Tempe
6428 S McClintock Dr, Tempe, AZ 85283
480.730.0205
[Google Map]
Sun: Closed
Mon-Sat: 11am-6pm