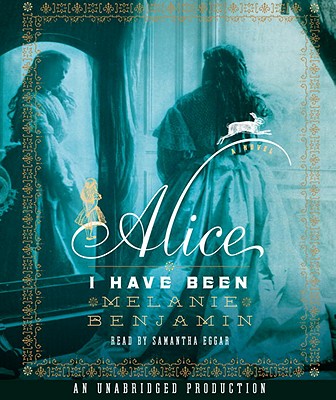 What would it be like to live up to an image of who you used to be? In this enthralling story, based on the life of Alice Liddle (a.k.a Alice in Wonderland), Melanie Benjamin shows us how a classic and the loneliness of one man trapped in his own "Wonderland" affected Alice her whole life. At times funny, then very sad, it was intriguing to learn facts about the real Alice and see the author's interpretation of her relationship with Charles Dodgson.

“Melanie Benjamin's Alice I Have Been is a richly woven fictional account of the life of the girl who became Alice in Wonderland. It's a mystery, and a love story, that follows Alice into adulthood after both tragic and wonderful experiences. I loved this creative and well-written book.”
— Doreen Pierson, Chapter One Book Store, Hamilton, MT

Few works of literature are as universally beloved as Alice’s Adventures in Wonderland. Now, in this spellbinding historical novel, we meet the young girl whose bright spirit sent her on an unforgettable trip down the rabbit hole–and the grown woman whose story is no less enthralling.


But oh my dear, I am tired of being Alice in Wonderland. Does it sound ungrateful?

Alice Liddell Hargreaves’s life has been a richly woven tapestry: As a young woman, wife, mother, and widow, she’s experienced intense passion, great privilege, and greater tragedy. But as she nears her eighty-first birthday, she knows that, to the world around her, she is and will always be only “Alice.” Her life was permanently dog-eared at one fateful moment in her tenth year–the golden summer day she urged a grown-up friend to write down one of his fanciful stories.

That story, a wild tale of rabbits, queens, and a precocious young child, becomes a sensation the world over. Its author, a shy, stuttering Oxford professor, does more than immortalize Alice–he changes her life forever. But even he cannot stop time, as much as he might like to. And as Alice’s childhood slips away, a peacetime of glittering balls and royal romances gives way to the urgent tide of war.

For Alice, the stakes could not be higher, for she is the mother of three grown sons, soldiers all. Yet even as she stands to lose everything she treasures, one part of her will always be the determined, undaunted Alice of the story, who discovered that life beyond the rabbit hole was an astonishing journey.

A love story and a literary mystery, Alice I Have Been brilliantly blends fact and fiction to capture the passionate spirit of a woman who was truly worthy of her fictional alter ego, in a world as captivating as the Wonderland only she could inspire.

Melanie Benjaminlives in Illinois, where she is at work on her next novel.

"From the Hardcover edition."