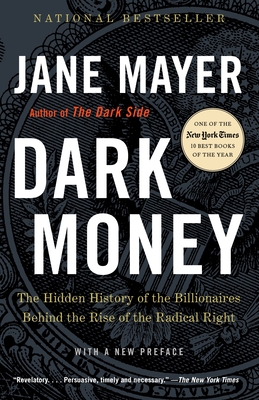 Who are the immensely wealthy right-wing ideologues shaping the fate of America today? From the bestselling author of The Dark Side, an electrifying work of investigative journalism that uncovers the agenda of this powerful group.

In her new preface, Jane Mayer discusses the results of the most recent election and Donald Trump's victory, and how, despite much discussion to the contrary, this was a huge victory for the billionaires who have been pouring money in the American political system.

Why is America living in an age of profound and widening economic inequality? Why have even modest attempts to address climate change been defeated again and again? Why do hedge-fund billionaires pay a far lower tax rate than middle-class workers? In a riveting and indelible feat of reporting, Jane Mayer illuminates the history of an elite cadre of plutocrats—headed by the Kochs, the Scaifes, the Olins, and the Bradleys—who have bankrolled a systematic plan to fundamentally alter the American political system. Mayer traces a byzantine trail of billions of dollars spent by the network, revealing a staggering conglomeration of think tanks, academic institutions, media groups, courthouses, and government allies that have fallen under their sphere of influence. Drawing from hundreds of exclusive interviews, as well as extensive scrutiny of public records, private papers, and court proceedings, Mayer provides vivid portraits of the secretive figures behind the new American oligarchy and a searing look at the carefully concealed agendas steering the nation. Dark Money is an essential book for anyone who cares about the future of American democracy.

Jane Mayer is a staff writer for The New Yorker and the author of three bestselling and critically acclaimed narrative nonfiction books. She co-authored Landslide: The Unmaking of the President, 1984–1988, with Doyle McManus, and Strange Justice: The Selling of Clarence Thomas, with Jill Abramson, which was a finalist for the National Book Award. Her book The Dark Side: The Inside Story of How the War on Terror Turned into a War on American Ideals, for which she was awarded a Guggenheim Fellowship, was named one of The New York Times’s Top 10 Books of the Year and won the J. Anthony Lukas Book Prize, the Goldsmith Book Prize, the Edward Weintal Prize, the Ridenhour Prize, the New York Public Library’s Helen Bernstein Book Award for Excellence in Journalism, and the Robert F. Kennedy Book Award. It was also a finalist for the National Book Award and the National Book Critics Circle Award. For her reporting at The New Yorker, Mayer has been awarded the John Chancellor Award, the George Polk Award, the Toner Prize for Excellence in Political Reporting, and the I. F. Stone Medal for Journalistic Independence presented by the Nieman Foundation at Harvard. Mayer lives in Washington, D.C.

“Dark Money is more than just a work of political journalism—it’s a vital portrait of a nation that, as perhaps never before, is being shaped by a few very rich, very conservative businessmen.” —San Francisco Chronicle

“Absolutely necessary reading for anyone who wants to make sense of our politics.” —The New York Review of Books

“Deeply researched and studded with detail . . . Seems destined to rattle the Koch executive offices in Wichita as other investigations have not.” —Washington Post

“With such turmoil on the right wing of American politics, reading Dark Money is like reading the first chapter of what may be a great political page-turner.”
—Chicago Tribune

“Jane Mayer . . . is, quite simply, one of the very few utterly invaluable journalists this country has.” —Esquire

“Amazing. . . . The most important political book of the year.”
—St. Louis Post-Dispatch

“Dark Money is almost too good for its own good.” —Los Angeles Review of Books