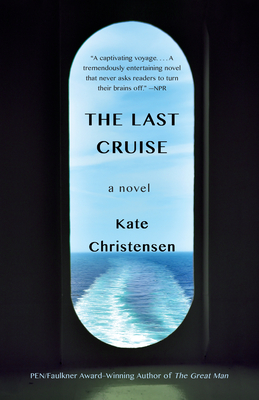 He’s a working class chef aboard a luxury liner, determined not to fall in love with one of the guests. She’s an estranged farm wife on her first cruise equally determined to keep a safe distance from the opposite sex. Put these two amidst a half-dozen other well drawn characters on an aging, crumbling ship and you can fairly well predict the outcome. Nevertheless, surprises are in store in this witty and moving novel which I just couldn’t put down.
— From Gayle's Picks (page 2)

The 1950s ocean liner Queen Isabella is making her final voyage—a retro cruise from Long Beach to Hawaii and back—before heading to the scrapyard. For the guests on board, it’s a chance to experience a bygone era of decadent luxury, complete with fine dining, classic highballs, string quartets, and sophisticated jazz. Smoking is allowed but not cell phones—or children, for that matter. But this is the second decade of an uncertain new millennium, not the sunny, heedless mid-twentieth century, and certain disquieting signs of strife and malfunction above and below deck intrude on the festivities, throwing a trio of strangers together in an unexpected and startling test of character.

Kate Christensen is the author of six prior novels, most recently The Astral, and the memoir Blue Plate Special. The Great Man won the 2008 PEN/Faulkner Award for Fiction. She has written reviews and essays for numerous publications, including The New York Times, Vogue, Elle, The Wall Street Journal, and Food & Wine. She lives with her husband in Portland, Maine. www.katechristensen.net

“A captivating voyage. . . . A tremendously entertaining novel that never asks readers to turn their brains off.” —NPR

“Christensen is a master at drawing us into the interior lives of her characters, toeing the line between satire and sympathy. She knows the comedy and humiliation of age just as well as the energy and anxiety of youth.” —The Washington Post

“In The Last Cruise Kate Christensen has given us a smart literary thriller whose ambitions extend well beyond its genre. It’s terrifying in ways you don’t expect.” —Richard Russo, author of Nobody’s Fool and Empire Falls

“An entertaining and elegantly written story about social class, self-delusion and the fragility of second chances. . . . [Christensen] demonstrates in The Last Cruise she’s quite capable of navigating deep waters.” —“Fresh Air,” NPR

“From the first page of The Last Cruise, it’s clear that you’re in the hands of a masterful storyteller. With wit and precision, Kate Christensen wrangles a large cast of characters . . . deftly turning what appears to be a comedy of manners into an intimate and moving story.” — Christina Baker Kline, author of Orphan Train

“[An] exciting story of human nature, love at all ages and in the face of insurmountable difficulties.” —USA Today

“A smart, fast-paced adventure story, two poignant love stories, and a shrewd and chilling warning to us all. What is not to love about The Last Cruise?” —Lily King, author of Euphoria

“The book steadily gains power as the boat loses its, and the portrayal of a small society on the edge of chaos is haunting. Christensen has crafted a Ship of Fools for an era of environmental concerns and social unrest.” —Publishers Weekly

“Christensen’s take on high seas adventure is all her own . . . perceptive, sophisticated, propulsive. . . . It’s a bracing example of popular storytelling with a literary twist.” —The Portland Press Herald

“[An] important, enlightening, utterly contemporary book about a world that hangs on the edge of something bigger than all of us. A must-read for our times.” —Cathi Hanauer, author of Gone and The Bitch Is Back

“A pitch-perfect novel that manages to both critique inequality and privilege and show the enduring power of love.” —The Free Lance–Star (Fredericksburg, VA)