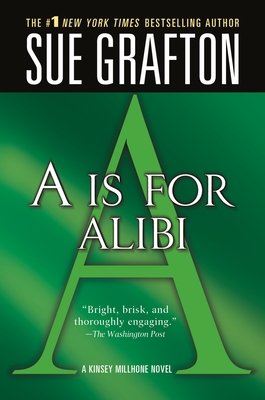 By Sue Grafton
$17.99
Not Available In-Store - Usually Ships from Warehouse in 1-5 Days

This is book number 1 in the Kinsey Millhone Alphabet Mysteries series.

READ THE SENSATIONAL BLOCKBUSTER THAT STARTED IT ALL!

A IS FOR AVENGER
A tough-talking former cop, private investigator Kinsey Millhone has set up a modest detective agency in a quiet corner of Santa Teresa, California. A twice-divorced loner with few personal possessions and fewer personal attachments, she's got a soft spot for underdogs and lost causes.

A IS FOR ACCUSED
That's why she draws desperate clients like Nikki Fife. Eight years ago, she was convicted of killing her philandering husband. Now she's out on parole and needs Kinsey's help to find the real killer. But after all this time, clearing Nikki's bad name won't be easy.

A IS FOR ALIBI
If there's one thing that makes Kinsey Millhone feel alive, it's playing on the edge. When her investigation turns up a second corpse, more suspects, and a new reason to kill, Kinsey discovers that the edge is closer—and sharper—than she imagined.

“[This] is what grandpa used to call a class act.” —Stanley Ellin

“Wit is the most versatile weapon in Sue Grafton's well-stocked arsenal, and she uses it with disarming precision. . . . Grafton excels in this milieu.” —Newsweek on the Sue Grafton series and Kinsey Millhone

“A wonderful character, tough but not brutish, resourceful and sensitive, a fit knight to walk those mean streets with her male predecessors.” —Los Angeles Times on the Sue Grafton series and Kinsey Millhone

“Somebody I want to spend more time with.” —The New York Times Book Review on the Sue Grafton series and Kinsey Millhone

“Bright, brisk, and thoroughly engaging.” —The Washington Post on the Sue Grafton series and Kinsey Millhone

“A woman we feel we know, a tough cookie with a soft center, a gregarious loner.” —Baltimore Sun on the Sue Grafton series and Kinsey Millhone