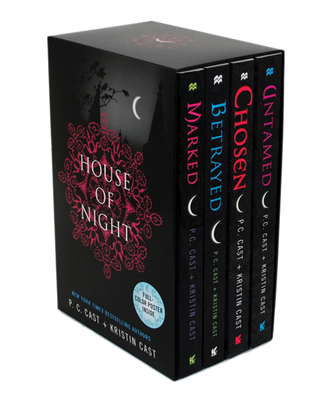 Dare to enter P.C. Cast and Kristin Cast's the House of Night with the first four titles of the series collected in a beautifully designed boxed set

The House of Night is a thrilling, New York Times bestselling book series that follows 16-year-old Zoey Redbird as she is "Marked" by a vampyre tracker and begins to undergo the "Change" into an actual vampyre. She has to leave her family in Broken Arrow, OK, and move into the House of Night, a boarding school for other fledgling vampyres like her.

It's tough to begin a new life, away from her parents and friends, and on top of that, Zoey finds she is no average fledgling. She has been Marked as special by the vampyre Goddess, Nyx. Although Zoey has awesome new powers, it's hard to fit in when everyone knows you're "special." As Zoey tries to make new friends and maybe find a hot boyfriend (or two), she comes up against all kinds of evil, from the perfect-looking, super-popular girl with not-so-faultless plans, to the mysterious deaths happening at the House of Night and all over Tulsa. Things at the House of Night are not always what they seem. Can Zoey find the courage deep within herself to find the truth and embrace her destiny?

P.C. Cast is the author of the House of Night novels, including Marked, Betrayed, Chosen, and Untamed.

Ms. Cast is a #1 New York Times and USA Today Best-Selling author and a member of the Oklahoma Writers Hall of Fame. With more than 20 million copies in print in over 40 countries, her novels have been awarded the prestigious Oklahoma Book Award, YALSA Quick Pick for Reluctant Readers, Romantic Times Reviewers’ Choice Award, the Prism, Holt Medallion, Daphne du Maurier, Booksellers’ Best, and the Laurel Wreath.

Ms. Cast was born in the Midwest and grew up being shuttled back and forth between Illinois and Oklahoma, which is where she fell in love with Quarter Horses and mythology. After high school she joined the United States Air Force and began public speaking and writing. After her tour in the USAF, she taught high school for 15 years before retiring to write full time. She now lives in Oregon surrounded by beloved cats, dogs, horses, and family.

Kristin Cast is a #1 New York Times and #1 USA Today bestselling author who teams with her mother to write the wildly successful HOUSE OF NIGHT series. She has editorial credits, a thriving t-shirt line, and a passion for all things paranormal. When away from her writing desk, Kristin loves going on adventures with her friends, family, and significant other, playing with her dogs (Grace Kelly and Hobbs the Tiny Dragon), and is obsessed with her baby.

“The Casts have put a very interesting new spin on vampire lore. The action is fast paced and absorbing, interspersing light moments among the intensity. When you reach the climax of the tale, you'll be on the edge of your seat. Though this is labeled a young adult novel, I strongly suspect adults of any age will enjoy it.” —Huntress.com on Marked

“The Casts, mother and daughter, have written a delightful book that's aimed at teens but will be enjoyed by readers of all ages. The trials of growing up are presented in the new and original context of a vampire society, and they're woven into a thoroughly entertaining story. Zoey is a dynamic and spunky heroine who has an amusing and realistic voice. She's surrounded by secondary characters who are just as engaging. The dialogue is sharp and the references to real people and pop culture add to the story. This promises to be a highly addictive series.” —Romantic Times on Marked

“Marked is one of the best coming of age stories to come out of Oklahoma since S. E. Hinton's The Outsiders. It teaches about the beauty of being a social outcast, friendship, and finding your own inner spirituality.” —The Beltane Papers on Marked

“Readers will identify with many of the characters, especially the protagonist … A good choice for those libraries serving fans of the occult…” —Library Journal on Marked

“From the moment I stuck my face in this book it hooked me! Totally awesome new take on vampires! Marked is hot and dark and funny. It rocks!” —Gena Showalter, author of MTV’s Oh My Goth, on Marked

“Cast reeled me in from paragraph one. I snorted and giggled through the whole thing, and devoured it in one sitting.” —MaryJanice Davidson, New York Times best-selling author of the Undead series, on Marked

“The Cast and Cast team is back and stirring up deep trouble in their beguiling supernatural world….The issues faced by these teens are not child's play, and the stakes are life and death. This is extremely craveable reading!” —Romantic Times on Betrayed

“Some would find it hard to write the sequel to a great book like Marked, but the Cast women obviously didn't have that problem. I laughed, sighed, and definitely cried. I thought that I knew where this series was headed but the authors took me completely by surprise. Congrats to P.C. and Kristin Cast, on a fantastic job. Bring on Chosen!” —Night Owl Romance Reviews on Betrayed

“It does not matter if you are male or female, this series will enthrall you…Authors P.C. Cast and Kristin Cast are a dangerous writing duo with poisonous pens. Highly recommended.” —Huntress Reviews on Betrayed

“Betrayed continues the House of Night series in a chilling fashion. PC and Kristin Cast once again prove their talent in telling a tale filled with all the normal teenage angst compounded with becoming a Vampyre....If you liked the first book in the series, you'll love this one!” —Paranormal Romance Reviews on Betrayed

“P.C. and Kristin Cast make a fantastic writing team. This enchanting tale is filled with non-stop action, strong relationships, and sweet blossoming romance. Whether you're a teen or an adult who loves a great paranormal read, this is a series not to be missed.” —Darque Reviews on Betrayed

“This highly addicting series offers a unique twist on the standard vampyre story and is sure to please a wide variety of readers. Although she is a vampyre, Zoey Redbird's journey is one for every teen. Her voice is genuine and ... captures the sincerity and frankness of a teenager in search of a new home and a place where she truly belongs. The emotional portrayal of Zoey's trouble and tribulations enhances the quality of these books. True to life, she struggles with issues of truest, loyalty, love, sexuality, and identity and moves though a myriad of conflicting emotions from happiness to confusion to grief. These books will have the reader laughing hysterically and sobbing unreservedly sometimes all at once.” —VOYA (on Marked and Betrayed)

“Teenage issues can seem like life or death, but in this haunting series, House of Night, that's really the case. Through Zoey's eyes readers are led into a world that's getting more complicated by the minute, where friends and enemies can switch positions in a heartbeat. The remarkable Cast duo continues to build a world that you won't soon forget!” —Romantic Times on Chosen

“Chosen, The House of Night series book 3, is like the cream in an Oreo cookie holding the two ends together. This story is gearing up for the final showdown between Zoey and Nepheret and mother and daughter team, P.C. and Kristen Cast are setting the stage perfectly for this....Again, P.C. Cast is an auto-buy author for me and this series is also on that auto-buy list.” —Paranormal Romance Reviews on Chosen

“You have a set up that feels a bit like X-Men meets Harry Potter meets Interview with the Vampire all told in a voice as engaging and spirited as anything recounted by Meg Cabot.” —JanuaryMagazine.com on Untamed

“This is a series that should not be missed!” —EnchantingReviews.com on Untamed

“Untamed is a fast moving and adventure filled read, with engaging characters and just a touch of romantic chemistry to keep fans guessing. This is a well-written young adult series that should easily appeal to both teens and adults.” —Darque Reviews on Untamed

“The mother and daughter writing team have created a believable world with characters that you can't let go of. The story is addictive and the cliffhanger ending in this installment has me wishing the months till March will fly by! The fifth book Haunted will surely be another great book in this amazing series.” —ParaNormalRomance.org on Untamed

“Zoey Redbird's first-person adventures take on added danger and importance in the latest House of Night release. Forced by circumstance to grow up quickly, Zoey's emotional and spiritual evolution is fascinating. The Cast duo breathes life and vibrancy into the characters and makes each one an integral part of the saga. Awesome and unforgettable as always!” —Romantic Times on Hunted

“The Cast duo has done it again! These ladies appear to be an unstoppable force within the world of YA literature… Teenage readers will be drawn to Zoey's everyday, angst-riddled life. Not only does she need to save the world, Zoey needs to solve some major vampyre/human boy drama. These stories are surreal, yet shockingly accurate when it comes to teenagers and their lives.” —TeensReadToo.com on Hunted

“The most masterful part of the writing lies in how the authors take on serious issues sex, peer pressure, bullying, parental alienation, religion, and substance abuse and weave them into the text. It is a refreshing perspective that doesn't feel like preaching.” —Tulsa World on Hunted

“I absolutely loved this book…. I enjoyed the story line very much and thought that the authors had correctly portrayed the mind of a teenager…. I would recommend this book to vampyre fans and anyone who would enjoy a wondrous fantasy story.” —Teen review on Flamingnet.com on Hunted

“An exceptional vampire tale… P.C. and Kristin Cast do a phenomenal job.” —Darquereviews.com on Hunted

“Hunted is an appealing supernatural thriller… The exciting storyline is filled with teenage angst as Zoey struggles with choices that would cause PTSD in most adults…. This fine entry casts a strong spell on readers.” —Thebestreviews.com on Hunted

“A richly nuanced standout… Even when she's confused, even when she's embroiled in teen-angst, Zoey's choices, delivered in fresh first person, seem believable. Even better? They seem smart…. This series has dark themes and subject matter, but the Cast team delivers them with sparkling dialogue, wry humor, and realistic characters driven by genuine humanity.” —Fictionistas.blogspot.com on Hunted