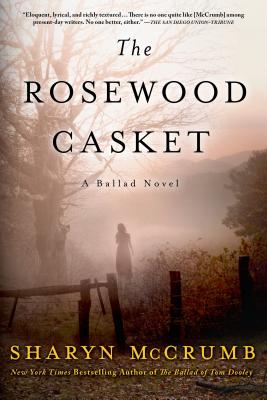 This is book number 4 in the Ballad Novels series.

"Eloquent, lyrical, and richly textured . . . There is no one quite like [McCrumb] among present-day writers. No one better either." —San Diego Union-Tribune

With a career spanning decades, and superlatives from reviewers nationwide--whose bestselling novels have been named Notable Books by the New York Times and the LA Times--this is one of Sharyn McCrumb's most cherished novels.

The stage is set for family drama when Randall Stargill lies dying on his southern Appalachian farm, and his four sons come home to build him a coffin made from the special cache of rosewood he has saved for this purpose. Meanwhile, mountain wisewoman, Nora Bonesteel, prepares another box—to be buried with him. Among them, a real estate developer is hovering over the family's farm bringing secrets and tensions to the surface.

In a style both lyrical and beautifully detailed, with a narrative that flows from Native American lore and the burnished tales of Daniel Boone—up to the sharpest, and keenly realized landscapes of Appalachia today, The Rosewood Casket is a novel as hauntingly beautiful as the mountains that gave it charge--and a stunning addition to our collection of McCrumb Ballad novels.

“McCrumb's love for the mystical beauty of modern Appalachia . . . and her fascination with the history of the region add depth and charm to a story that's warm without being sentimental. A bestseller in the making!” —Booklist

“With fluid writing and sensitive telling, McCrumb presents her Appalachian series as perfectly as dogwood in the spring.” —Houston Chronicle

“The lyric writing pulls the reader from page to page. There also are the colors of the South that McCrumb stitches so masterfully into this hauntingly beautiful quilt. This book should be on everyone's summer reading list.” —Richmond Times-Dispatch