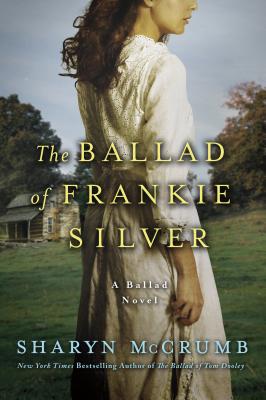 This is book number 5 in the Ballad Novels series.

Set in the Appalachian wilderness and blending legends and folklore with high suspense, this stellar novel, The Ballad of Frankie Silver, is considered one of McCrumb's crowning achievements.

In 1833 Frankie Silver was an eighteen-year-old girl convicted of murder in Burke County, North Carolina. Through a detailed investigation, the local sheriff, and soon all the townsfolk, discover reason to question her guilt---but the wheels of justice were mercilessly unstoppable, and she was hanged.

Now, more than a century later, another woman is convicted of murder in the lush hills of Tennessee. Her life is in the hands of Spencer Arrowood, a man who begins to discover that the convictions of these two women have deep and haunting parallels. Although Frankie's fate cannot be changed, there is still time to alter the fate of another innocent woman.

In a voice that could only be Sharyn McCrumb's, the worlds of these two murders, these two women, intersect in this densely plotted and lyrical novel—and characters, generations, and history are breathlessly painted against an Appalachian canvas.

“Some stories wait more than a hundred years for the right teller to come along.” —Asheville Citizen-Times

“This literate and provocative novel…is McCrumb's best book yet.” —The Plain Dealer (Cleveland)

“McCrumb shifts easily back and forth in time, combining police procedural with an old-fashioned historical narrative worthy of Dickens or Jane Austen.” —Asheville Citizen-Times

“The Ballad of Frankie Silver invites us to pull up a quilt and turn our faces to the fire…dense and lovely.” —The New York Times Book Review

“From snippets of rural life, scraps of memories, and fragments of tragedy, [McCrumb] has stitched together a vivid American heirloom.” —Newsday

“A novel of mesmerizing beauty and power.” —Richmond Times-Dispatch

“One of our most gifted authors…She has never been better in this masterful blend of fact and fiction.” —The San Diego Union-Tribune