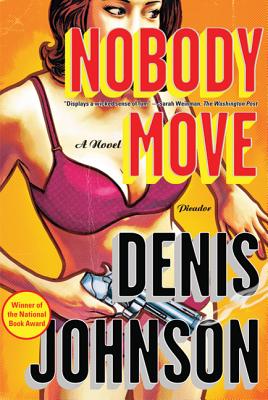 By Denis Johnson
$19.00
Not Available In-Store - Usually Ships from Warehouse in 1-5 Days

“The God I want to believe in has a voice and a sense of humor like Denis Johnson’s.” So says Jonathan Franzen (The Corrections), and I couldn’t agree more. Denis Johnson’s latest book, Nobody Move, is a gripping noir thriller that hijacked my attention for an entire afternoon. I read it once all the way through, and then started again. You don’t want to miss the story of Jimmy Luntz, a down-on-his-luck compulsive gambler on the run, and the crack-shot, drunk Native American Anita. Together they stagger through the dark, lawless underworld Johnson has created—a world that chillingly mirrors our own.

Jimmy Luntz is an innocent man, more or less. He's just leaving a barbershop chorus contest in Bakersfield, California, thinking about placing a few bets at the track, when he gets picked up by a thug named Gambol and his life takes a calamitous turn. Turns out Jimmy owes Gambol's boss significant money, and Gambol's been known to do serious harm to his charges. Soon enough a gun comes out, and Jimmy's on the run. While in hiding he meets up with a vengeful, often-drunk bombshell named Anita, and the two of them go on the lam together, attracting every kind of trouble.

From the National Book Award-winning author Denis Johnson comes Nobody Move: "does exactly what noir should do--propel the reader downhill, with its cast of losers, louts and toughs as they cheat, shoot, and exploit one another into fast-talking oblivion" (Jess Walker, The Boston Globe).

“A short, tight, grimly funny dark crime-comedy about losers, hustlers, alcoholics, murder, lowlifes, and a sexy broad with a heart of ice. I loved it.” —Sam Coale, Providence Journal

“A hard-boiled, modern shoot-'em-up in which nobody's hands are clean but everyone gets great lines.” —Bob Minzesheimer, USA Today

“Reads like a Coen brothers movie waiting to happen, a cross between Blood Simple and No Country for Old Men.” —Andrew Ervin, The Miami Herald

“The God I want to believe in has a voice and a sense of humor like Denis Johnson's.” —Jonathan Franzen