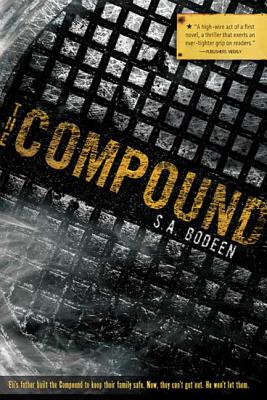 This is book number 1 in the The Compound series.

S.A. Bodeen's The Compound is a 2009 Bank Street - Best Children's Book of the Year.

Eli and his family have lived in the underground Compound for six years. The world they knew is gone, and they've become accustomed to their new life. Accustomed, but not happy. No amount of luxury can stifle the dull routine of living in the same place, with only his two sisters, only his father and mother, doing the same thing day after day after day. As problems with their carefully planned existence threaten to destroy their sanctuary—and their sanity—Eli can't help but wonder if he'd rather take his chances outside. Eli's father built the Compound to keep them safe. But are they safe—really?

S. A. Bodeen is the author of The Garden and The Compound, which earned her an ALA Quick Pick for Young Adults, a Bank Street Best Children's Book of the Year, and a Publishers Weekly "Flying Start." She is also the author of several picture books, including Elizabeti's Doll, winner of the Ezra Jack Keats Award. Bodeen grew up on a dairy farm in Wisconsin. Her first friends were cows, which she named after characters in books. From there she went on to be a Peace Corps volunteer in East Africa, and has lived in seven states, as well as a remote Pacific island. She adores books and is a big fan of cheese. She lives in Oregon.

“* A high-wire act of a first novel, a thriller that exerts an ever-tighter grip on readers. . . . The audience will feel the pressure closing in on them as they, like the characters, race through hairpin turns in the plot toward a breathless climax.” —Publishers Weekly, Starred Review

“Debut novelist Bodeen effectively builds the claustrophobic suspense with each chapter as readers slowly discover the Compound is not the refuge it seems. Combining elements of Margaret Peterson Haddix's Running Out of Time (1995) and Kazuo Ishiguro's Never Let Me Go (2005), published for adults, this post-apocalyptic thriller will also pique the interest of Nancy Werlin and L.J. Adlington fans.” —Booklist

“Suspenseful and riveting, this debut novel raises serious issues about what it means to survive.” —Kirkus Reviews