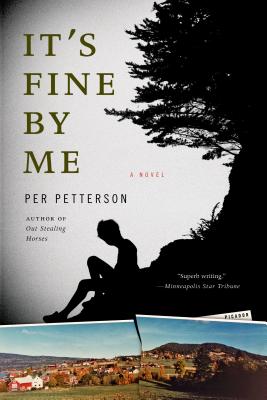 “This is a dark, brooding novel with a fine, thin, persistent theme of hope that life's better possibilities are just around the corner, waiting for Arvid Jansen (Norway's Holden Caulfield) to believe in them and in himself. A nuanced observation of the pain and disappointments of growing up from one bright and bruised young man's point of view, this is a book about the ordinary yet crushing losses we all incur and the decisions we make to pick ourselves up and continue forward. Petterson is a master at a kind of understated power, and this novel is well worth the reading.”
— Linda Milleman, Tattered Cover Book Store, Denver, CO

Fans of Per Petterson's other books in English will be delighted by this opportunity to observe Arvid Jansen in his youth from a fresh perspective. In It's Fine by Me, Arvid befriends a boy named Audun. On Audun's first day of school he refuses to talk or take off his sunglasses; there are stories he would prefer to keep to himself. Audun lives with his mother in a working-class district of Oslo, Norway. He delivers newspapers and talks for hours about Jack London and Ernest Hemingway with Arvid. But he's not sure that school is the right path for him and feels that life holds other possibilities. Sometimes tender, sometimes brutal, It's Fine by Me is a brilliant Scandinavian novel from the acclaimed author of Out Stealing Horses and I Curse the River of Time.

Don Bartlett has translated dozens of books of various genres, including several novels and short story collections by Jo Nesbø and It's Fine by Me by Per Petterson. He lives in Norfolk, England.

“Reading a Petterson novel is like falling into a northern landscape painting--all shafts of light and clear palpable chill.” —Time

“Petterson's youthful novel is an openhearted bildungsroman....His sentences yearn to fly away into poetry.” —James Wood, The New Yorker

“Spare, slim, and haunting, It's Fine by Me...offers the same moody prose and brilliantly unsentimental character revelations that have made Petterson a literary star.” —Caroline Leavitt, The Boston Globe

“The melancholy story, and the superb writing that propels it, are both raw and honest--the brutality of the father, the disregard of printing-press colleagues, the ugly street fights--and also deeply compassionate.” —Minneapolis Star Tribune