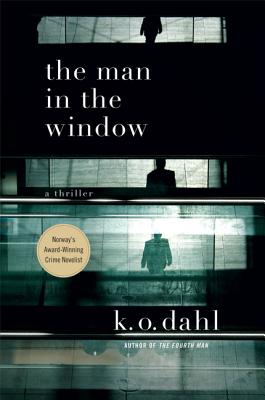 This is book number 2 in the Oslo Detectives series.

A cryptic murder resurrects dark memories of past atrocities in this latest mystery from the master of Norwegian crime writing.

It's Friday the thirteenth, the Norwegian capital is enveloped in freezing cold, and Reidar Folke Jespersen passes what will be the last day of his life.

The aging antique dealer leaves home and takes a taxi to a nearby café. A few hours later, through the window of the café, he watches his wife enter the door to a flat on the other side of the street, where her lover lives.

In the early hours of the following morning, Jespersen is found stabbed to death, sitting naked in an armchair in the display window of his antique shop.

Detectives Frølich and Gunnarstranda are called to the scene. Their only clues are a numerical combination written in ink on the body of the dead man, a red string tied around his neck, a few missing World War II objects, and a number of people extremely satisfied with the news of the man's death. Questions of love and betrayal, loyalty and guilt consume the investigation, just as they fill the private lives of the investigators.

K. O. Dahl's dark and poetic writing moves through the shadows of one country's history---a country where victims, perpetrators, and even police officers are haunted by the past, still trying to cope with dark memories of the Nazi occupation. The Man in the Window, the second installment in Dahl's Oslo police mysteries, is an intricate and chilling detective story about love, revenge, and the inescapable past.

The highly acclaimed and award winning crime writer K.O. Dahl's popular crime series has rapidly become an international success and critics around the world have labeled him as Norway's answer to Henning Mankell. Dahl has been awarded with the Riverton Prize and nominated for Glasnyckeln (The Glass Key), Brage Literary Prize and the Martin Beck Award. His books include The Fourth Man, The Man in the Window, The Last Fix, and Lethal Investments.

“Kjell Ola Dahl has written a captivating detective story with plenty of nuances, and there is no reason for him to hide in the shadow of Mankell. ” —Zillo (Germany)

“Kjell Ola Dahl masters the art of tightening the intrigue to maintain the suspense until the very well-conceived end.” —Sala Allehanda (Sweden)

“Kjell Ola Dahl writes like Volga. Calm and powerful. Everything falls into place at the end and it is constantly suspenseful.” —Dagens Nyheter (Sweden)