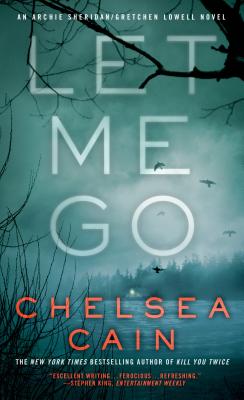 By Chelsea Cain
Email or call for price
Out of Print

This is book number 6 in the Archie Sheridan & Gretchen Lowell series.

I'm hopelessly addicted to Chelsea Cain's Archie Sheridan series, and I have been since I cracked open the first book! Despite the longevity of the series (this is book #6) Cain manages to keep the plot fresh, never veering into cliches or ruts. In this latest installment, Archie has several goals: keep clean, protect his confidential informant and forget Gretchen. He fails at all three and the sickening events that follow will keep readers feverishly going until late at night (under the covers, of course). I can't wait to see what she comes up with next!

Detective Archie Sheridan just has to get through the next few days, then his birthday and Halloween will be over. But with escaped serial killer Gretchen Lowell on the loose, the investigation into the murder of a DEA agent demanding his attention, and journalist Susan Ward showing up at his apartment needing a favor, it's going to be a long weekend.

"Grabs you like a deadly undertow and doesn't let you go."—Parade magazine

Soon Archie finds himself crashing a masked ball on a private island owned by Jack Reynolds, a notorious local drug kingpin. By morning, Archie is back on painkillers, a guest is dead, and Archie quickly realizes that little is what it seems. One thing is clear: Gretchen is back, and Archie's nemesis and sometime lover has something special in mind for the birthday boy. Now, on Halloween Eve, with time running out and the life of someone close to Archie on the line, Archie knows his only chance is to give Gretchen exactly what she wants. But Gretchen will prove more horrifying, and unpredictable, than Archie ever could have imagined…in Let Me Go by Chelsea Cain.

"Gretchen Lowell isn't just the most fascinating villain…to appear in crime fiction in many, many years; she's also becoming a multifaceted character capable of engendering a much wider range of emotions than one would expect of somebody who enjoys carving up spleens."—Booklist (starred review)

Chelsea Cain is the New York Times bestselling author of The Night Season, Evil at Heart, Sweetheart, and Heartsick. Both Heartsick and Sweetheart were listed in Stephen King’s Top Ten Books of the Year in Entertainment Weekly. Chelsea lived the first few years of her life on an Iowa commune, then grew up in Bellingham, WA, where the infamous Green River killer was “the boogieman” of her youth. The true story of the Green River killer’s capture was the inspiration for the story of Gretchen and Archie. Cain lives in Portland with her husband and daughter.

“Gretchen Lowell isn't just the most fascinating villain (and certainly the most appealing serial killer) to appear in crime fiction in many, many years; she's also becoming a multifaceted character capable of engendering a much wider range of emotions than one would expect of somebody who enjoys carving up spleens…The legion of fans who can't get enough of the Beauty Killer will be lining up for more.” —Booklist (starred review)

“Cain's novel has headlong pacing, endearing characters, twisted humor, and scalpel-sharp descriptions of murder and mayhem. It grabs you like a deadly undertow and doesn't let you go.” —Parade magazine

“[Chelsea Cain] creates stories that are razor-sharp in their delivery and heart stopping in their presentation. . . Kill You Twice is one of her best efforts.” —The Huffington Post on Kill You Twice

“Masterful on every level.” —Booklist (starred review) on Kill You Twice

“The fifth novel to feature Portland detective Archie Sheridan and his nemesis, Gretchen Lowell, delivers the shocks.” —Miami Herald on Kill You Twice

“[Chelsea Cain] wields her words like the sharpest of blades, carving away at reality to create unimaginable horrors. . .Cain writes tense narrative that crackles like the air in a summer thunderstorm, rife with danger.” —Louisville Courier Journal on Kill You Twice

“Cain's talent for gory detail, wry humor, and expertly braiding together plotlines into a fine mesh is a fresh spark of life. Kill You Twice is a taut thriller that will delight and rattle fans and newcomers alike.” —Portland Monthly Magazine on Kill You Twice

“High-octane…quick-paced…frightening…The world that Cain creates is as dark and ominous as ever….This is the mood that Cain has mastered: the dread of knowing that something is off…It is what presses her readers onward, pulses racing.” —The New York Times Book Review on The Night Season

“The Night Season has headlong pacing, endearing characters, twisted humor, and scalpel-sharp descriptions of murder and mayhem. It grabs you like a deadly undertow and doesn't let go.” —Parade magazine (Parade Picks) on The Night Season

“The suspense is plentiful and Cain's evocation of the gloomy atmosphere and Portland setting is superb…excellent…the new queen of serial-killer fiction.” —Kirkus Reviews on The Night Season

“Cain easily weaves the history of the real-life Vanport flood with her trademark heart-stopping moments, and fans will be pleased to see the series flourishing without Gretchen on every page.” —Publishers Weekly (A Top 10 Mystery of the Year) on The Night Season

“Superb…Cain pinned readers to their seats with a unique mix of horror, black humor, and psychological tension. This time she adds another arrow to her narrative quiver: the interplay between landscape and mood…Terrifying.” —Booklist (starred review) on The Night Season

“She's the most twisted--and most beautiful--serial killer on the planet, and she's back... It's not to be missed.” —USA Today on Evil at Heart

“You have to hand it to Cain, who's made the serial-killer genre a thoroughly female-friendly experience. . . . [She] churns stomachs with a delicate touch.” —The New York Times Book Review on Evil at Heart

“Remember the old debate about which is mightier, the pen or the scalpel? In Evil at Heart, both are in the same hands, and both cut all the way to the bone.” —The Oregonian on Evil at Heart

“Cain is among a new breed of women writers stepping way out of the stereotypical female comfort zones… serving up meatier and more gruesome stories…. Cain knows how to keep readers fortified with psychological drama.” —Chicago Sun Times on Evil at Heart

“The narrative bounces along with Cain's trademark mix of tight plotting, creepy characters, and body parts.” —Charlotte Observer on Evil at Heart

“Cain continues to display her remarkable ability to probe the psyches of her characters... Popular entertainment--the kind that mixes crime, horror, and even a little black comedy--just doesn't get much better than this.” —Booklist (starred review) on Evil at Heart

“We've been down Hannibal Lecter Avenue many times, and these books shouldn't work...but they do. Chalk it up to excellent writing and Cain's ferocious sense of humor. The Portland (Ore.) setting is refreshing, too.” —Stephen King on Sweetheart, Entertainment Weekly (A Top-Ten Book of the Year)

“Sensual and engulfing…keeps us turning the pages.” —The New York Times Book Review on Sweetheart

“Cain's debut Heartsick had even the most jaded thriller fans sleeping with the lights on. She tells an equally frightening story in Sweetheart.” —USA Today on Sweetheart

“Profoundly creepy and disturbing.” —The Boston Globe on Sweetheart

“A sharp psychological inquiry into evil and obsession, as well as a deeply unhealthy love story.” —The Seattle Times on Sweetheart

“Sweetheart is not afraid to explore damage too severe to be undone.” —Los Angeles Times on Sweetheart

“The forces that conspired to make Cain's Heartsick a bestselling page-turner last year have reunited in its sequel...With her preternatural grasp of pacing and ability to create vivid characters with astonishing economy, Cain expertly drives her narrative.” —Los Angeles Times on Sweetheart

“[Cain] pushes the form to an undeniably persuasive and irresistible guilty pleasure.” —The Oregonian on Sweetheart

“There are numerous thrills to be had.” —Kirkus Reviews on Sweetheart

“Chelsea Cain is a rising star...Sweetheart reunites the characters of her terrific hit debut [and] advances the Archie-Gretchen relationship exotically and dramatically.” —The Sunday Times (London) on Sweetheart

“The writing style, combined with a Thomas Harris-like relish for human gore, translated into a remarkably fresh and exciting thriller that didn't miss the opportunities for laughs in the midst of the carnage.” —Toronto Star on Sweetheart

“A distinctive and disturbing novel that blurs the lines between suspense fiction and psychological suspense…Mystery fans who enjoy their whodunits decidedly creepy should thoroughly enjoy this fast-paced and downright gruesome psychological thriller.” —Chicago Tribune on Heartsick

“Move over, Hannibal Lecter! Chelsea Cain's thriller boasts a wicked new serial murderer…one of the most seductive and original psychopaths since Hannibal…In addition to spiky characters, Cain has a crisp voice, a wicked sense of humor, and an imagination for all the horrors that can unfold in a locked basement…a profoundly creepy thriller.” —Entertainment Weekly on Heartsick

“Readers will feel Archie's exquisite pain, and they'll relate to the troubled young reporter…An excellent choice for mystery readers who like to be creeped out.” —The Miami Herald on Heartsick

“Thoroughly engaging... The journey to the end of Heartsick is more pleasure than pain.” —Seattle Post-Intelligencer on Heartsick

“It does the Hannibal Lecter genre proud. You'll find yourself waiting anxiously for the planned next book in the series.” —Rocky Mountain News on Heartsick

“Heartsick is a very different, and a very good, novel...The twisted tale of Archie and Gretchen is enough to hold any novel together, but Cain adds a perfectly detailed hunt to the mix...There are more books to come in this series. I can hardly wait.” —Toronto Globe on Heartsick

“One of the most original serial-killer thrillers to appear in several years…Throw out all your assumptions about the sameness of serial-killer novels; this one breaks the mold… The thriller of the year.” —Booklist (starred review) on Heartsick

“The book puts such an original spin on [serial-killer novels] that Cain might as well have invented a new genre… It deserves a wide audience.” —Toronto Star on Heartsick

“Outstanding…[Lowell] is as memorable a villain as Hannibal Lecter…A vivid literary style lifts this well above the usual run of suspense novels.” —Publishers Weekly (starred review) on Heartsick

“Packed with razor-edged character studies, realistic dialogue and an unyielding plot, Heartsick is on of the year's freshest and most original mysteries...The brisk plot never lets up as Cain keeps the suspense level high. Heartsick is a superb police procedural.” —Florida Sun-Sentinel on Heartsick

“A gory suspense piece that is absolutely impossible to put down… Stylistically, this is great stuff for true-crime readers and for those who enjoy Jan Burke's Irene Kelly series. Recommended.” —Library Journal on Heartsick

“Dark, distressing and disturbing, Heartsick is also a triumph of the human heart. Just pray you never meet Gretchen.” —Val McDermid, bestselling author of The Grave Tattoo, on Heartsick

“An excellent choice for mystery readers who like to be creeped out.” —Fort Worth Star Telegram on Heartsick

“I'm looking forward to the next adventure of this unlikely pair.” —St. Louis Post-Dispatch on Heartsick