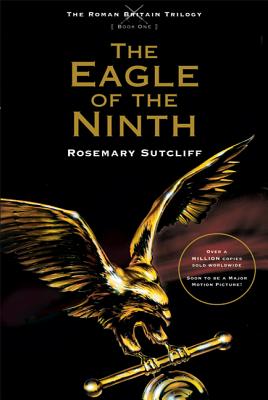 This is book number 1 in the The Roman Britain Trilogy series.

Rosemary Sutcliff's The Eagle of the Ninth is the classic story of a young Roman centurion sent out to recover the infamous Ninth Legion's missing symbol of honor. Over a million copies sold worldwide, it was adapted to a major motion picture (The Eagle) starring Channing Tatum and Jamie Bell.

The Ninth Legion marched into the mists of Northern Britain—and they were never seen again. Four thousand men disappeared and their eagle standard was lost. It's a mystery that's never been solved, until now . . .

Marcus Aquila has to find out what happened to his father, who led the legion. So he sets out into the unknown, on a quest so dangerous that nobody expects him to return.

“Sutcliff has a genius for the re-creation of an historical period.” —Horn Book Reflections

“An unusual blend of stirring action and poetic symbolism. Authentic in background, skillful in plot, and perceptive in characterization.” —Booklist

“Decades later, I can still hear echoes of The Eagle of the Ninth in my head: the chink of mail, the tired beat of the legionaries' feet.” —The Independent

“What a splendid story it is, compulsive reading!” —Junior Bookshelf