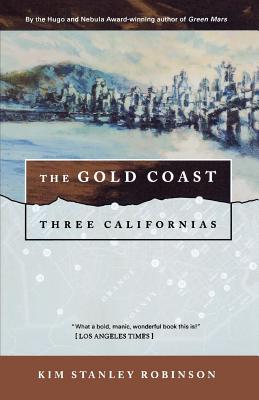 This is book number 2 in the Three Californias series.

2027: Southern California is a developer's dream gone mad, an endless sprawl of condos, freeways, and malls. Jim McPherson, the affluent son of a defense contractor, is a young man lost in a world of fast cars, casual sex, and designer drugs. But his descent in to the shadowy underground of industrial terrorism brings him into a shattering confrontation with his family, his goals, and his ideals.

“What a bold, manic, wonderful book this is!” —Los Angeles Times

“A rich, brave book . . . It celebrates, with an earned and elated refusal of despair, the persistent, joyful survival of human persons in the interstices of the American juggernaut.” —The Washington Post

“Like light focused into coherent beam, The Gold Coast brilliantly illuminates the craziness of technology out of control.” —Interzone