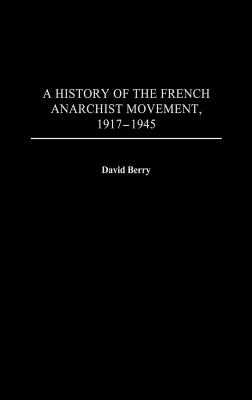 By David Berry
Email or call for price

The first full-length English-language history of the French anarchist movement between the wars, this study analyzes the anarchists' responses to the Russian and Spanish revolutions and to the creation of an international communist movement. It details the dilemmas facing anarchism at a crucial moment in the movement's history, a time characterized by serious questioning of traditional anarchist theory and practice. On the basis of original research using the anarchist movement's press and other publications, as well as archival sources, Barry concludes that the French anarchist movement was not as isolated as has been previously suggested and that it was in fact probably stronger in the 1930s than it had been before or since.

During this key era, leading militants within the movement sought to clarify anarchist theory regarding the nature of 20th-century revolutions, to challenge the rejection of organization, and to integrate anarchism more fully into the broader socialist and trade union movements. The movement was capable of organizing large and efficient campaigns and its analyses of developments on the left and in the trade union movement were often more prescient than those of the socialists and communists. Barry takes seriously the anarchists' attempts to come to terms with the challenges of revolution and to respond positively to them in a distinctly libertarian socialist way. Ultimately, they were only partially successful in such efforts, and this accounts in large part for their historic failure as a movement.

DAVID BERRY is Lecturer in French in the Department of European Studies, Loughborough University. He is an editor of the Journal of European Area Studies and a member of the advisory board of Anarchist Studies.
My Account • Sign In • Sign Out • Register
NEW & USED BOOKS
AUTHOR EVENTS • GIFTS
Tempe
6428 South McClintock Drive
480.730.0205
[Google Map]
Sunday-Friday 10am-8pm
Saturday 9am-8pm
Trade Counter 11am-6pm daily