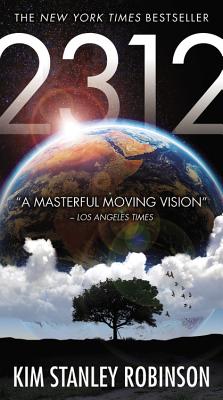 By Kim Stanley Robinson
$10.00
Email or call for price.

From the acclaimed author of New York 2140 and Red Mars, this NYT bestselling novel tells the story of a future where humanity has populated miraculous new habitats engineered across the solar system -- and the one death that triggers a precarious chain of events that could destroy it all.

The year is 2312. Scientific and technological advances have opened gateways to an extraordinary future. Earth is no longer humanity's only home; new habitats have been created throughout the solar system on moons, planets, and in between. But in this year, 2312, a sequence of events will force humanity to confront its past, its present, and its future.

The first event takes place on Mercury, on the city of Terminator, itself a miracle of engineering on an unprecedented scale. It is an unexpected death, but one that might have been foreseen. For Swan Er Hong, it is an event that will change her life. Swan was once a woman who designed worlds. Now she will be led into a plot to destroy them.

Kim Stanley Robinson is a New York Times bestseller and winner of the Hugo, Nebula, and Locus awards. He is the author of more than twenty books, including the bestselling Mars trilogy and the critically acclaimed Forty Signs of Rain, The Years of Rice and Salt, and 2312. In 2008, he was named a "Hero of the Environment" by Time magazine, and he works with the Sierra Nevada Research Institute. He lives in Davis, California.

"A magnificent achievement...hugely imaginative and beautifully written."—Booklist (Starred Review) on 2312

"2312paints an absolutely credible and astonishingly beautiful picture of the centuries to come, of the sort of schism and war, the art and love, the industry and ethics that might emerge from humanity going to space without conquering it and without solving all its problems."—Boingboing

"Intellectually engaged and intensely humane in a way SF rarely is, exuberantly speculative in a way only the best SF can be, this is the work of a writer at or approaching the top of his game."—Iain M. Banks

"2312 is a monumental tour-de-force that re-imagines the solar system in ways no one has envisioned before. Whether comparing the compositions of Beethoven to those of skylarks and warblers, or describing a life-threatening sunrise on Mercury, Robinson fills 2312 with joy and exuberance, danger and fear, and the steadily mounting suspense of a mystery that spans the planets. This is the finest novel yet from the author who gave us the Mars Trilogy and GALILEO'S DREAM. An amazing accomplishment."—Robert Crais

"Inherently epic stuff... expect interplanetary strife, conspiracies, more big ideas than most SF authors pack into a trilogy... [yet] this is ultimately in so many respects a book about Earth... a wise and wondrous novel"—SFX

"A feast for the imagination and intellect - shockingly clever"—Sun (UK)

"A brilliant, plausible account of how humans might colonize planets, moons and asteroids, 2312 is also about the future of art and family."—NPR Books

"This is a grand tour of an intensely imagined interplanetary future of modified human beings, terraformed planets, experiments in economics and sociology and hundreds of other delights. All of it is in Robinson's eloquent, enthusiastic and inimitable prose"—Morning Star (UK)

"In his vibrant, often moving new novel, "2312," Robinson's extrapolation is hard-wired to a truly affecting personal love story. [...] Perhaps Robinson's finest novel, "2312" is a treasured gift to fans of passionate storytelling; readers will be with Swan and Wahram in the tunnel long after reaching the last page."—LA Times