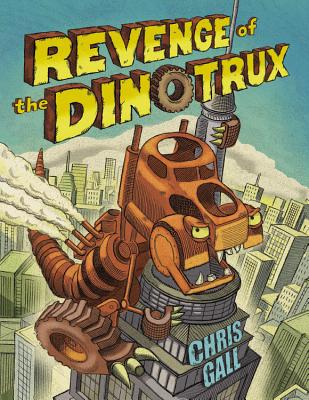 By Chris Gall
$17.99
Not Available In-Store - Usually Ships from Warehouse in 1-5 Days

This is book number 2 in the Dinotrux series.

The second book in the rip-roaring mash-up of dinosaurs and trucks that inspired the Netflix TV series!
Millions of years ago, DINOTRUX ruled the earth. But in the present day, people rule them! Their rusty fossils have spent decades stuck in a drafty museum surrounded by screaming kids, and now they're ready to break out and let off some really old steam.
HONNNK!!! DINOTRUX ARE ON THE LOOSE!
Garbageadon eats cars, Craneosaurus peeks in windows, and Tyrannosaurus Trux climbs a skyscraper... Who will win the mighty standoff between man and prehistoric beast? Find out in this rip-roaring sequel to Chris Gall's highly praised Dinotrux, featuring all your favorite trux and some never-before-seen ones!

* "Gall's dinosaur/machine mash-ups are, once again, the star of the show, commanding attention (and generating laughs) in every action-filled, rust-toned scene."
—Publishers Weekly, starred review

"Young fans of all things big and noisy will make trax for this dynamic dino-diversion."
—Kirkus Reviews

"Dramatic, full-page illustrations brim with the energy of these fierce machines.... A fun follow-up, appealing to old and new fans alike."—School Library Journal