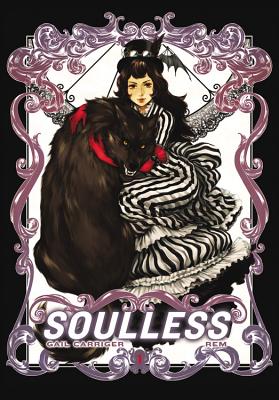 By Gail Carriger
Email or call for price
Hard to Find

This is book number 1 in the The Parasol Protectorate (Manga) series.

The life of a spinster in Victorian London isn't an easy one on the best
of days, but such a life becomes infinitely more complicated when said
spinster is "soulless" - a preternatural bridging the gap between the
natural and supernatural worlds. Miss Alexia Tarabotti has this unique
distinction, and when she is assailed at a formal gathering by a rove
vampire, an encounter that results in the death of the half-starved
creature, her circumstances become exponentially more complicated
indeed! Now caught up in an intrigue with life or death stakes, Alexia
must rely on all her talents to outmatch the forces conspiring against
her, but it may be the man who has caught her eye - Lord Conall Maccon -
and their budding flirtation that truly drives her to her wit's end!

New York Times bestselling author Gail Carriger writes to cope with being raised in obscurity by an expatriate Brit and an incurable curmudgeon. She escaped small town life and inadvertently acquired several degrees in Higher Learning. Ms. Carriger then traveled the historic cities of Europe, subsisting entirely on biscuits secreted in her handbag. She resides in the Colonies, surrounded by fantastic shoes, where she insists on tea imported from London.