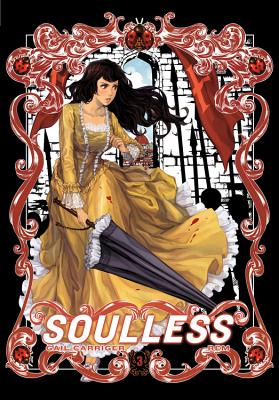 By Gail Carriger
Email or call for price
Hard to Find

This is book number 3 in the The Parasol Protectorate (Manga) series.

Condemned by society and her werewolf husband due to a pregnancy she cannot explain, Alexia Maccon - preternatural, tea aficionado - seeks an explanation for this "infant inconvenience" so as to cleanse her sullied reputation and prove her fool of a husband wrong. Preternaturals are a rare breed and the only history of their kind lies in Italy with the Templars, a group that once partnered with preternaturals to hunt down werewolves and vampires. Will Alexia find an explanation for her impossible offspring? Or do the Templars have other plans for the curious "Soulless One"?

New York Times bestselling author Gail Carriger writes to cope with being raised in obscurity by an expatriate Brit and an incurable curmudgeon. She escaped small town life and inadvertently acquired several degrees in Higher Learning. Ms. Carriger then traveled the historic cities of Europe, subsisting entirely on biscuits secreted in her handbag. She resides in the Colonies, surrounded by fantastic shoes, where she insists on tea imported from London.