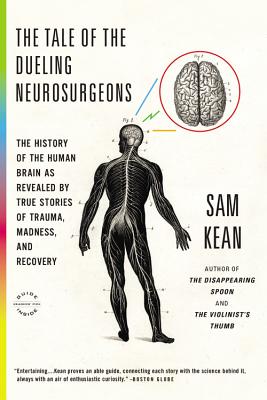 The author of the bestseller The Disappearing Spoon reveals the secret inner workings of the brain through strange but true stories.

Early studies of the human brain used a simple method: wait for misfortune to strike -- strokes, seizures, infectious diseases, horrendous accidents -- and see how victims coped. In many cases their survival was miraculous, if puzzling. Observers were amazed by the transformations that took place when different parts of the brain were destroyed, altering victims' personalities. Parents suddenly couldn't recognize their own children. Pillars of the community became pathological liars. Some people couldn't speak but could still sing.

In The Tale of the Dueling Neurosurgeons, Sam Kean travels through time with stories of neurological curiosities: phantom limbs, Siamese twin brains, viruses that eat patients' memories, blind people who see through their tongues. He weaves these narratives together with prose that makes the pages fly by, to create a story of discovery that reaches back to the 1500s and the high-profile jousting accident that inspired this book's title.

With the lucid, masterful explanations and razor-sharp wit his fans have come to expect, Kean explores the brain's secret passageways and recounts the forgotten tales of the ordinary people whose struggles, resilience, and deep humanity made neuroscience possible.

Sam Kean is the New York Times bestselling author of Caesar's Last Breath, The Tale of the Dueling Neurosurgeons, The Disappearing Spoon, and The Violinist's Thumb, all of which were also named Amazon top science books of the year.

The Disappearing Spoon was a runner-up for the Royal Society of London's book of the year for 2010, and The Violinist's Thumb and The Tale of the Dueling Neurosurgeons were nominated for the PEN/E.O. Wilson Literary Science Writing Award in 2013 and 2015, as well as the AAAS/Subaru SB&F prize.

His work has appeared in the Best American Nature and Science Writing, the New Yorker, the Atlantic, the New York Times Magazine, Psychology Today, Slate, Mental Floss, and other publications, and he has been featured on NPR's "Radiolab," "All Things Considered," and "Fresh Air."

One of Amazon's Best Books of the Year: Science

"This is Sam Kean's finest work yet, an entertaining and offbeat history of the brain populated with mad scientists, deranged criminals, geniuses, and wretched souls. The Tale of the Dueling Neurosurgeons is one of those books that will have you following your friends around, reading passages out loud, until they snatch the book away from you and read it for themselves. Good luck getting it back."—Amy Stewart, author of The Drunken Botanist

"Put your Netflix queue on hold. Sam Kean's The Tale of the Dueling Neurosurgeons will command your full attention from the first page. It's not just an engaging guide to mysteries of existence; it's compelling story-telling for anyone with a taste for the bizarre and metaphysical."—William Poundstone, author of Rock Breaks Scissors

"In tale after tale, best-selling author Kean provides a fascinating, and at times gloriously gory, look at how early efforts in neurosurgery were essentially a medical guessing game.... Entertaining and quotable, Kean's writing is sharp, and each individual story brings the history of neuroscience to life. Compulsively readable, wicked scientific fun."—Kirkus

"Reading this collection is like touring a museum of neuroscience's most dramatic anomalies, each chapter taking us to a different place and time.... Kean's colloquial language and intimate voice bring all of this series of mini-histories to life -- all of which are sure to stimulate a wide range of brains."—Publishers Weekly

"[Kean] proves an able guide, connecting each story with the science behind it, always with an air of enthusiastic curiosity."—Kate Tuttle, Boston Globe

"[Kean's] strength lies in his storytelling, and in the humane combination of humor and compassion toward the strange life histories he pieces together.... Kean has a penchant for the kind of vivid description that makes one want to clutch one's head tenderly close."—Margaret Quamme, Columbus Dispatch

"To pick up one of these stories is to lose oneself in them. Where does the brain end and the mind begin? Curious readers will find both brain and mind fully revved up while engaging with this powerfully appealing and thought-provoking work of neuroscience history."—Donna Chavez, Booklist

"The author's skill in illuminating how the brain functions and malfunctions manifest themselves in people's lives makes for absorbing reading....These avowals ultimately raise weighty, compelling questions about the nature of identity and what it means to be human."—The Wall Street Journal

"Strokes, seizures, accidents: if they don't kill, they can traumatize the brain so badly that an individual's personality can be significantly changed. But, explains New York Times best-selling author of the terrific The Violinist's Thumb, early neuroscientists saw such traumas as an opportunity to study the brain's wondrous workings."—Library Journal, "Barbara's Picks"

"Beyond paying tribute to the scientific advances these patients made possible, Kean humanizes the patients themselves."—Scientific American

"After tackling DNA and the periodic table in his previous books, Kean has moved on to the human brain, which he dissects via dozens of vivid anecdotes.... His subtle meta touches are a heady delight."—Joe McGovern, Entertainment Weekly

"Sam Kean can spin a tale as well as any fiction writer....Kean is a rare writer who approaches science writing as a child would a playground at recess. It's a wide-open field full of possibilities, limited only by the surroundings and what our imaginations can do with them."—PopMatters

"In the capable hands of science writer Sam Kean, stories of brain injuries shine just a bit brighter, illuminating not only the interesting characters delivering bedside diagnoses or lying on the examination table, but general principles of scientific discovery that are still relevant today....Kean breathes life into the patients as well as the physicians and scientists tasked with understanding the injuries."—The Scientist

Kean is "science's premier storyteller, the man who regularly turns the history of science into sagas filled with adventure, mystery, fascinating people, and fun."—The Washington Post

"Entrancing.... Sam Kean burrows into the workings of an organ once deemed as unknowable as the far reaches of the galaxy, and does so with boyish charm, accessible language, a prodigious amount of enthusiasm and the sobering realization that throughout history a catastrophic brain injury has ghoulishly been the neuroscientists best friend."—James Macgowan, Toronto Star

"These stories are entertaining....But they're also illuminating, as Kean shows how each one advanced scientific knowledge."—Washingtonian

"Kean delves into a scientific world before modern technology, and tells the stories of people who had sudden changes in personality, felt phantom limbs, pathologically lied, and experienced other mysteries traced back to the brain. He does so with humor and humanity, making the mind-boggling history of neuroscience a fun read."—Nicole Dubowitz, DCist

"Mesmerizing.... With a razor-edged wit and intriguing narrative, the pages are easily devoured, all while Kean explores the deepest labyrinths of the brain."—Mellinda Hensley, Los Angeles Magazine

"Dueling Neurosurgeons will confirm Kean's already-solid reputation as a writer who can make anything understandable and interesting.[...] Although hugely entertaining (perhaps especially so in this era of vampire and zombie fascination), Kean's book contains amazingly clear details about our brains."—Winnipeg Free Press

"Breezy, informal, entertaining stories that link what we now know of the nervous system to events and personalities of the past."—James W. Kalat, American Psychological Association's PsycCRITIQUES