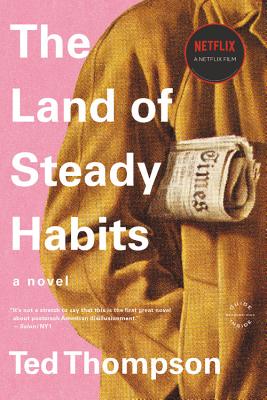 The Land of Steady Habits is exactly the kind of book I love--family dramas that switch between multiple viewpoints, allowing the reader to peer into each character's mind. Thompson is a skilled writer and there were moments I truly laughed out loud. Other moments, I felt so sad for the characters--trapped in the prisons of their own making. I look forward to seeing more from this talented author!

Ted Thompson's shrewdly funny and finely observed novel about a man who must reckon with the high cost of the good life. A major motion picture streaming on Netflix, directed by Nicole Holofcener, and starring Ben Mendelsohn, Edie Falco, and Connie Britton.

For Anders Hill, long ensconced in the affluent, insular villages of suburban Connecticut that some call "the land of steady habits," it's finally time to reap the rewards of his sensibly-lived life. Newly retired after decades of doing everything right, Anders finds that the contentment he's been promised is still just out of reach. So he decides he's had enough of stability: he leaves his wife, buys a condo, and waits for freedom to transform him.

But as the cheery charade of Christmas approaches, Anders starts to wonder if parachuting out of his old life was the most prudent choice. Stripped of the comforts of his previous identity, Anders turns up at a holiday party full of his ex-wife's friends and is surprised to find that the very world he rejected may be the one he needs the most. Thus Anders embarks on a clumsy, hilarious, and heartbreaking journey to reconcile his past with his present.

Reminiscent of the early work of Updike and Cheever, Ted Thompson writes with a striking compassion for his characters and fresh insight into the American tradition of the suburban narrative.

Ted Thompson is a graduate of the Iowa Writers' Workshop, where he was awarded a Truman Capote Fellowship. His work has appeared in Tin House and Best New American Voices, among other publications. He was born in Connecticut and lives in Brooklyn with his wife.

"Filled with heartache and humor, this assured, compassionate first novel channels the suburban angst of Updike and Cheever, updating the narrative of midlife dissatisfaction with a scathing dissection of America's imploding economy...with pitch-perfect prose and endearingly melancholy characters, Thompson offers up a heartbreaking vision of an ailing family and country." --STARRED Booklist

"In his beautiful and generously imagined debut, Ted Thompson will rightly draw comparisons to other chroniclers of suburban life -Updike, Cheever-but I think we need to dig deeper into the tradition-to John O'Hara-because The Land of Steady Habits is our Appointment in Samarra and Anders Hill is our Julian English. Whether it's a society built on coal or one collapsing under the weight of credit default swaps, both novels explore what ails America by looking into the wrecked hearts of those who seem to have everything and now must reckon the high cost of the good life. Over the course of a single holiday season, Thompson takes Anders on a tragicomic ride, through exile and redemption, until a new kind of hero emerges, human and fallible, a man who becomes more for having accepted less and finds greatness because he chooses decency. Fearless and tremendously moving , The Land of Steady Habits tells a story we need to hear and announces the arrival of a voice we should all welcome."—Charles D'Ambrosio, author of The Point and The Dead Fish Museum

"It would probably never occur to New England white people that they are an ethnicity, but this sharp and funny saga of a Connecticut family unraveling is a detailed natural history of upper crust suburbanites and how they live (and drink). The reader learns not to take good fortune and loved ones for granted--and also that a liquor store owner in Westport will never starve."—Sarah Vowell, author of Unfamiliar Fishes and Assassination Vacation

"Ted Thompson will be weighed against some famous Johns -- Updike and Cheever -- for the usual wrong reasons. (Suburbs, separation.) But the comparison is apt in all the ways that matter: because the prose is sumptuous, the characterizations economically brilliant, the themes still important and universal. Because this is a great book. And readers who sample its riches will be greedy to scoop up the entire treasure of it. And so, ladies and gentlemen, we may have found our generation's Rabbit, Run."—Darin Strauss, author of Half Life and More Than It Hurts You

"A book that is funny, shrewd, and heartbreaking by turns, The Land of Steady Habits concerns the lost-and-found souls of Connecticut and Manhattan, and at every point this novel offers both pleasure and insight into its cast of characters. You don't expect a first novel to be as inward and worldly as this one is, and at the same time to be so readable. Ted Thompson's dialogue is so good, so unerring, that he must have perfect pitch. A wonderful debut."—Charles Baxter, author of The Feast of Love

"Thompson's sharp-eyed debut is that kind of searing portrait of American wealth unraveling that is both dazzling and immeasurably sad." -Kirkus Reviews

"Ted Thompson's terrific debut novel, The Land of Steady Habits, feels like a natural extension of Yates' classic Revolutionary Road or Updike's Rabbit series. Call this elegant, witty and economical novel Rabbit, Meltdown. It's not a stretch to say that this is the first great novel about post-crash American disillusionment."—NY1's The Book Reader

"In this impressive debut, Thompson delivers a vivid portrait of life in America's suburban upper crust explored through a splintering family. Through sharply written prose and fiery dialogue, Thompson's characters come alive: a recently retired husband on the brink of self-destruction; a conflicted wife in the midst of an affair; a middle-aged son in an "extended state of adolescence"; and a pair of pretentious neighbors with a precocious, rebellious teen. Together their lives, as they unravel and collide, weave a story that is at once honest, raw, heartbreaking, and comical... The novel finds its real power in the authenticity of its characters, in Thompson's ability to craft raw humans beneath the social pageantry of their external lives, relatable in their irritations, ethical lapses, and small triumphs... Thompson displays a keen ability to capture human emotion and interior conflict, and it is this stunning realism that consistently captivates the reader."—Bustle

"Thompson skillfully and knowingly maps the familiar intergenerational terrain of WASP ennui with a warmth that is ultimately redeeming."—San Francisco Chronicle

"Thompson has a great gift for storytelling, and this is that rare book that would translate well to the big screen but doesn't seem to have been written with the movies in mind. The Land of Steady Habits is a success in most of the important ways. It is entertaining. It is written in impeccable... prose. Its characters feel like real people. Thompson has taken very well-worn territory-the footprints of Cheever and Yates are everywhere in evidence-and produced something that never feels like a retread."—The Daily Beast

"This funny, bittersweet debut... is a new entry in that rich American genre, the novel of the suburbs. Thompson, refreshingly, finds his own path through this well-traversed landscape... one of the great charms of The Land of Steady Habits is that Thompson never really points fingers; ironic wit and absurd comedy abound, but he's not interested in condemning the suburban life. His characters are neither shallow nor morally bankrupt; on the contrary, each is wrestling, however ineptly, with the vexing binaries of the human condition, the choices between freedom and obligation, between self-fulfillment and the commitments of love."—Washington Independent Review of Books

"Ted Thompson's The Land of Steady Habits, set in a wealthy Connecticut commuter town, seems to cause most readers to immediately reach for the Cheever and Updike comparisons. But Thompson's novel makes the territory utterly its own. Its central character, Anders, manages to be sympathetic and blindly destructive all at once, and Thompson works him for both raucous humor and real insight. A sly, painstaking portrait of an unraveling marriage and a crumbling culture. And on a purely technical level, so elegant and meticulously arranged that I kept looking for hidden wires. There are none. Honesty is the only trick here."—San Francisco Chronicle

"It's not a stretch to say that this is the first great novel about postcrash American disillusionment."—Salon/NY1